With money given to him by his cousin, Alexander Hamilton came to mainland North America to pursue a higher education. Before going to college, Hamilton first enrolled in Francis Barber’s grammar school in Elizabethtown, New Jersey. Attending this school from October 1772 until he started college in September 1773, Hamilton boarded with William Livingston in an Elizabethtown house rented from Jacob De Hart just a short walk from the school.

Henry Brockholst Livingston, the son of William Livingston, could not have been Alexander Hamilton’s schoolmate at the grammar school of Elizabethtown in 1772–73. Brockholst enrolled at the College of New Jersey at Princeton in 1770 and as a freshman won a “premium” at the September 1771 commencement for “Extempore Exercises in the Latin language.” 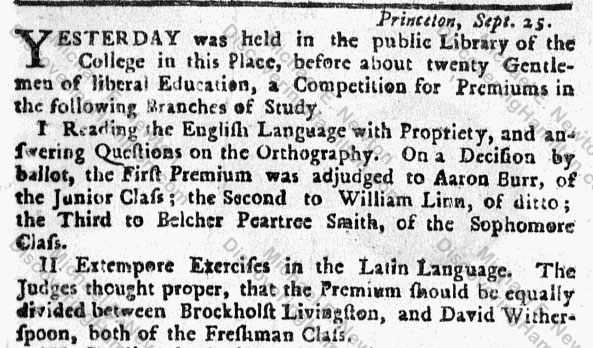 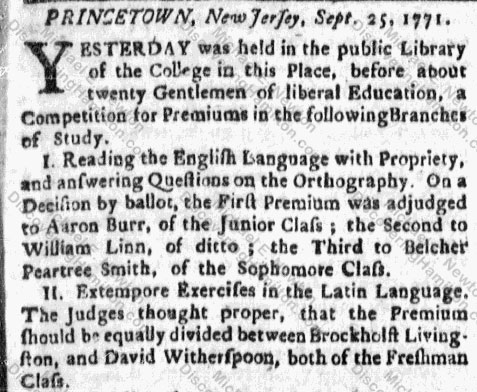 Henry Brockholst Livingston graduated from the College of New Jersey in September 1774.[2] At the “Public Commencement,” he delivered an “English oration on Liberty.”

Jonathan Dayton, the son of Elias Dayton of Elizabethtown, may or may not have been Hamilton’s classmate at the grammar school in Elizabethtown, as John C. Hamilton claimed.

Jonathan Dayton graduated from the College of New Jersey in 1776.[3] If he attended college for the normal four years, and there is no evidence to suggest otherwise, he would have already left for college by the time Hamilton arrived in Elizabethtown. It is possible, however, that Dayton did not enter the College of New Jersey until September 1773 and graduated after just three years. Although the college generally prohibited pupils from studying at an advanced pace, they may have granted early diplomas in 1776 to students who were entering the army, as Jonathan Dayton did. Like with Brockholst Livingston, even if Jonathan Dayton did not attend the grammar school at the same time as Hamilton, Hamilton surely would have met him whenever he came to town to visit his family and friends.

There is one youth who definitely attended the grammar school in Elizabethtown alongside Alexander Hamilton. On May 5, 1773, Francis Barber billed “Mastr John Livingston,” the son of William Livingston, £1 5s for “1 quarters instruction” and another 7s 6d for “wood & cash for house cleaning.” The total of £1 12s 6d was received in full by Francis Barber on May 12.

Another receipt shows that Francis Barber billed “Mastr John L. Livingston” £1 5s on August 5, 1773, for “1 quarters instruction,” which was paid on August 21.

N.B. It is possible that John C. Hamilton or whoever was his source had misheard or misremembered that it was John Lawrence Livingston and not his brother Henry Brockholst Livingston who attended the grammar school of Elizabethtown with Alexander Hamilton.

[5] The New York Genealogical and Biographical Record 41:307; The Correspondence and Public Papers of John Jay 3:384.

One thought on “Alexander Hamilton’s Classmate at the Grammar School in Elizabethtown, New Jersey”