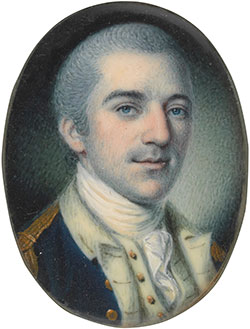 John Laurens is well known as a close friend of Alexander Hamilton and a key character in the Hamilton musical. He served as an aide to George Washington alongside Hamilton before becoming a minister to France and then returning to fight at Yorktown, helping assault Redoubt 10 under Hamilton’s command.

Prior to the American Revolution, John Laurens went to London, then Geneva, and then back to London to receive an education. While in London, on October 26, 1776, John Laurens married Martha Manning, the daughter of William and Elizabeth Manning, who had previously lived on the West Indian island of St. Kitts and also owned land on St. Croix but now lived in London. Not long after, Laurens left his pregnant wife to return home to America to fight in the Revolution.

Laurens kept his marriage a secret from his friends. It was not until April 1779, some twenty months after Hamilton and Laurens first met, that Hamilton found out through the grapevine that Laurens had a wife and daughter.

In December 1780, Congress chose John Laurens to be a special minister to France. Upon hearing of his arrival in France, Laurens’s wife Martha Manning Laurens decided to travel with her daughter to reconnect with him. Apparently, John Laurens completed his mission and returned to the United States before Martha was able to see him. Martha Manning died in Lisle, France, during this trip.

John Laurens biographer Gregory D. Massey notes that “the only extant detail of her death”[1] is an undated letter (written prior to November 19, 1781) from Martha’s brother-in-law Benjamin Vaughan to Benjamin Franklin stating:

Mrs Laurens, wife to the Col., lately died at Lisle. The effects she left are few & trifling, but the [magis]trates of the place refuse hitherto to suffer the operation of her will, till the Cols. pleasure is known. Her clothes she bequeathed to her maid, to the amount only of some £20 or £30; & her watch & trinkets to a most lovely child, now in part an object of my cares.

Thus, there was no known record of the date of Martha Manning Laurens’s death. The Papers of Henry Laurens says that she “died, apparently in November 1781,” based on the above letter from Benjamin Vaughan.[2] John Laurens biographer Gregory D. Massey writes that she died in the “fall” of 1781.[3] No one had a specific date.

1781 Codicil to the 1763 Will of William and Elizabeth Manning

In April 1763, William and Elizabeth Manning made out a joint will, which was executed on the island of St. Croix because they owned property there.[4]

At the time of their April 1763 joint will, the Mannings had borne five children but one had already passed away:

Subsequent to this April 1763 will, the Mannings had another son, William Manning Jr., in December 1763, Elizabeth Manning died in 1780, and then “Martha Weatherill Laurens” died in 1781 (John Ryan Manning also died in 1781,[11] but he either died after the 1781 codicil was made out or news of his death had not yet reached William Manning). So at this time, William Manning updated his will with a codicil adding the William Manning Jr. as an heir and transferring Martha Laurens’s portion to her daughter Frances Eleanor Laurens. The codicil named four executors, three of whom lived on St. Croix, one of whom was “my relation John Ryan Esq. of St. Croix,” probably a brother of Elizabeth Ryan Manning. The codicil stated that “it is my will that my said executors be in every respect entitled to see this codicil executed both in quality aforesaid & likewise as dealing masters without the least restraint whatever from the general or any other dealing court on the island of Saint Croix.”[12]

In the long text of the codicil there is a passage most relevant to the story of John Laurens and Martha Manning. In the codicil, William Manning wrote:

So now we have a date of death for Martha Weatherill Manning Laurens: September 1, 1781.

This is a codicil to the joint will of me William Manning late of the island of St. Christophers, but now of the city of London merchant & Elizabeth his wife executed in the island of Saint Croix on the second day of April in the year of our Lord one thousand seven hundred & sixty three & confirmed by his Majesty the King of Denmark on the 19th day of October one thousand seven hundred & seventy four which said will gave our estates real and personal to our children two shares to a son and one to a daughter being then four in number and to any child or children that should be born after[.] And whereas on the first day of December in the year of our Lord one thousand seven hundred & sixty three another son was born & called William Manning, my wife dying on the third day of January one thousand seven hundred & eighty now to prevent any doubts and disputes in the division of my estate at my death I do hereby declare that I give and bequeath to my said son William Manning two shares of my said estate or an equal proportion with my son John Ryan Manning. And whereas my daughter Martha Weatherill Laurens the wife of John Laurens died on the first day of September last past leaving only one child by the said marriage named Frances Eleanor Laurens I declare that it is my will and meaning and I give the share of part of my estate meant & intended for my deceased daughter Martha Weatherill Laurens to her daughter Frances Eleanor Laurens on her attaining the age of twenty one years or day of marriage which shall first happen after my decease & it is my will that the said Frances Eleanor Laurens shall be maintained & educated at the discretion of my executors from the produce of her share during her minority but if the said Frances Eleanor Laurens should die before she shall attain her age of twenty one years & without leaving children then it is my will & meaning that the share of my said estate so given to her shall go to & be divided between my surviving children or issue as directed by the joint will & in case any of my children should die in my lifetime or before they attain the age of twenty one years I give the share of such child or children to be divided as before directed to the survivor or survivors of my said children or their issue. And whereas three of the executors appointed by the joint will are since dead namely Henry Ryan[,] Thomas Lillie and John Bourryau and the fourth William Smith now resides at Grenada & cannot inspect my affairs I do hereby appoint my son William Manning of London, my good friends William Newton Esq.[,] Samuel Newton Esq. & my relation John Ryan Esq. of St. Croix my true & lawful executors to this my will and it is my will that said executors be in every respect entitled to see this codicil executed both in quality aforesaid & likewise as dealing masters without the least restraint whatever from the general or any other dealing court on the island of Saint Croix[.] In witness whereof I the said William Manning have to this codicil to my will set my hand & seal this thirtieth day of October in the year of our Lord one thousand seven hundred and eighty one.
William Manning 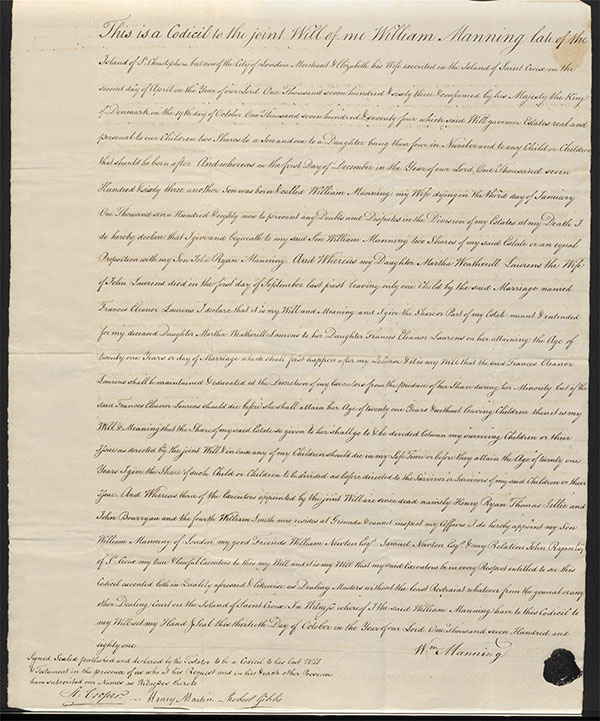 [13] Strangely, the image now found on the Rigsarkivet website is a scan of a microfilm. When I saved an image of this record back in March 2020, it was a scan of the original document. Perhaps they moved those original scans to another place on their website, but I don’t know where.

© Posted on August 25, 2021, by Michael E. Newton. Please cite this blog post when writing about these new discoveries.