The Reverend Hugh Knox was the mentor of Alexander Hamilton on St. Croix. When Hamilton moved to New York/New Jersey, Knox wrote letters of recommendation for him. Knox was the author of numerous religious books, his sermons were often printed as pamphlets, and these works were sold in the West Indies, New York, and elsewhere.

In addition to being a Presbyterian minister, Hugh Knox was a medical doctor. When Knox moved to the Danish Island of St. Croix in 1772, he was not licensed to practice medicine there. Even though he started treating patients soon after his arrival, he applied for a medical license in 1775 and received it in January 1776.[1] 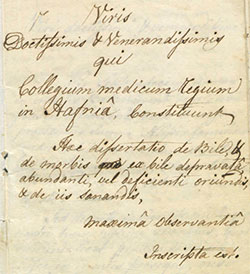 A previously unknown work by Hugh Knox, related to his efforts to obtain a medical license, is a dissertation he wrote in Latin on St. Croix in December 1773 to the “viris doctissimis & venerandissimis qui [the most learned and most venerable of the] Collegium medicum regium in Hafnia [Royal College of Physicians in Copenhagen]” entitled “Hac dissertatio de Bile, & de morbis ex bile depravata, abundanti, vel deficienti oriundis, & de iis sanandis [This dissertation on bile, and diseases of bile deficiency, overabundance, or defective origins, and about healing them].” It was signed “Hugo Knox.”[2]

This dissertation was included in the St. Croix files among other documents related to Hugh Knox’s application for a medical license. I have put these all together into one pdf.

Unfortunately, the Rigsarkivet collection from which I downloaded this in March 2020 has been rearranged and I can no longer find this on their website. It might still be found somewhere in a different location, but perhaps it has been permanently removed and it is quite fortunate that I downloaded it when I did. (This was also the case with William Manning’s codicil, which I wrote about recently, but in that case I was able to find where it had moved to.)

[2] Translations from the Latin are by the author, who does not know the language, especially medical terminology. If anyone can improve these translations, please let me know.

© Posted on August 26, 2021, by Michael E. Newton. Please cite this blog post when writing about these new discoveries.

One thought on “Hugh Knox’s Medical Dissertation from 1773”