According to the 1909 Den Danske Lægestand [The Danish Medical Condition] by Kristian Carøe, Edward Stevens was born on the West Indian island of Antigua on February 28, 1752.[1] Unfortunately, Carøe provided no source for this information.

In his 1939 essay on Alexander Hamilton’s birth and parentage, H. U. Ramsing revealed that Edward Stevens was baptized on Antigua in November 1754. Ramsing concluded, “It is therefore an error when K. Carøe gives his birthday as Feb. 28, 1752.”[2]

It is of course possible, though less likely than the alternative, for someone to be baptized two years and nine months after his birth. But without any contemporary record of his birth, it was impossible to know whether Edward Stevens had in fact been born on February 28, 1752, or perhaps sometime in 1754 closer to the date of his baptism.

In a collection of “letters received and drafts for letters sent” by Denmark’s “West Indian medical administration,” a circa 1815 “List of practising Physicians in the danish Westindia Islands” gives ages, dates and locations of birth, education, and years of practice for each licensed doctor. At the top of the list is Hamilton’s “dear” friend Edward Stevens. He is listed as 61 years old, born February 21, 1754, in Antigua. 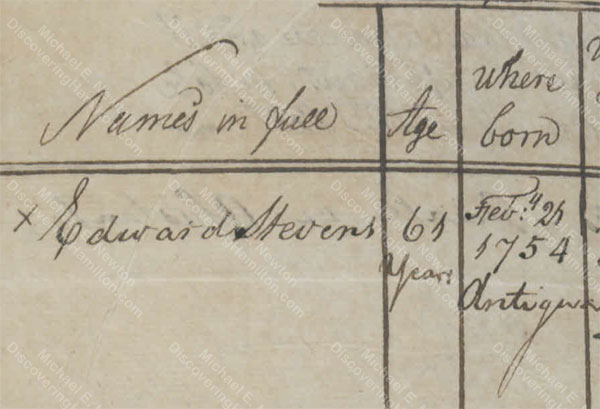 With this newly discovered contemporary record, February 21, 1754, must be considered the most reliable date of birth for Edward Stevens rather than the February 1752 date given without source by Kristian Carøe. This February 1754 date also makes more sense given Stevens’s baptism in November 1754.

[2] H. U. Ramsing, “Alexander Hamilton og hans Mødrene Slaegt.” I have not been able to find this record of Edward Stevens’s baptism.

© Posted on November 5 , 2018, by Michael E. Newton. Please cite this blog post when writing about these new discoveries.