Last week I wrote about Alexander Hamilton’s “dear” friend Edward Stevens and the discovery of a contemporary record that gave Steven’s date of birth, something which previously was a matter of dispute.

Around the same time that I discovered that record, I found a letter by Stevens that included information that, as far as I can tell from a search of Google Books and other sources, has never been known before.

The letter I found, the contents of which are mundane and unimportant, was written by “Edward Stevens, Prest” on January 2, 1810, from St. Croix’s “Government House” to St. Croix’s Burgher Council. 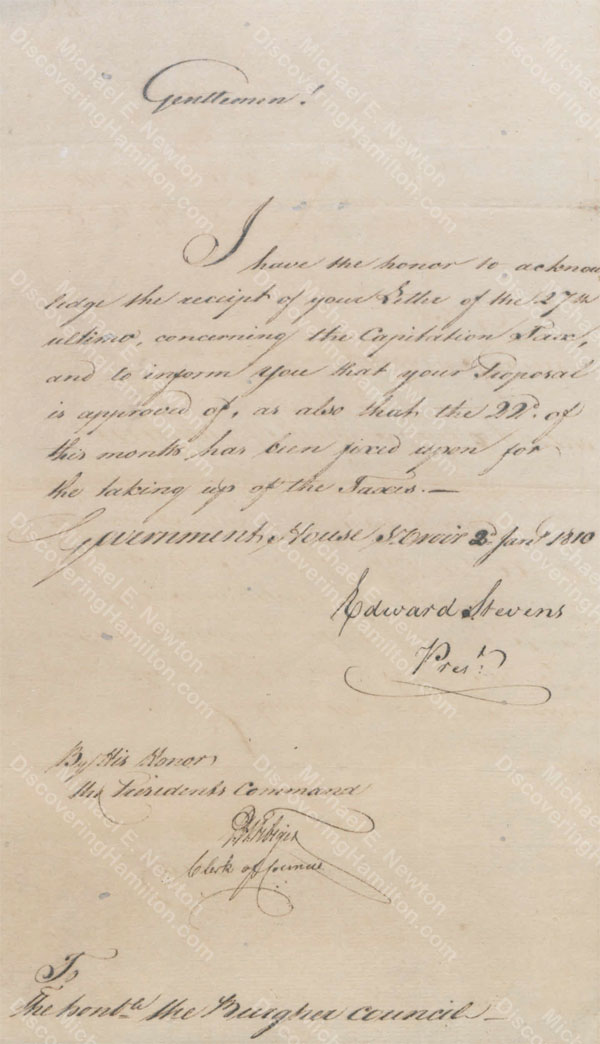 A note on the back of the letter written by a member of the Burgher Council reads: “Letter of 2d  January 1810 from the President approving of our proposal relative to the Taxes.” 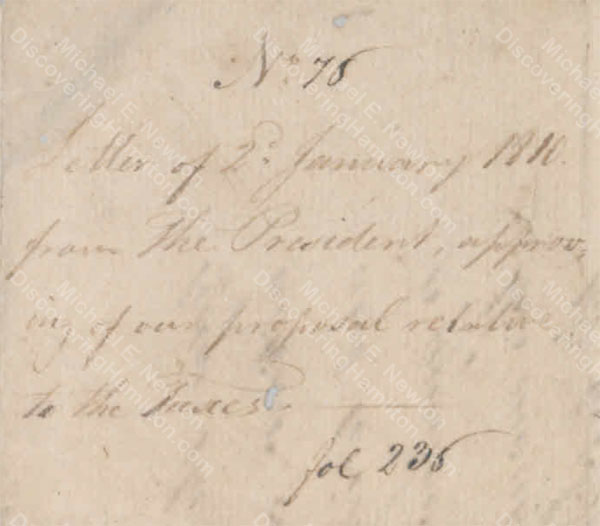 So how did Dr. Edward Stevens become President of St. Croix?

The British Occupation of St. Croix

In the midst of the Napoleonic Wars, the United Kingdom and Denmark went to war with each other. In August and September 1807, Britain bombarded Denmark’s capital city as it tried to capture or destroy the Danish fleet in a battle known as the Bombardment of Copenhagen or the Second Battle of Copenhagen. When news of the war and battle reached the West Indies in December, a British fleet sailed from Barbados to the Danish West Indies. St. Thomas surrendered on December 22. St. Croix on December 25.

Edward Stevens Under the British Occupation

As a leading citizen and a former U.S. ambassador, Edward Stevens was named to a series of increasingly prominent positions under the British occupation.

On May 26, 1808, Edward Stevens was named Second Commissioner for the Dutch and Danish Loans. 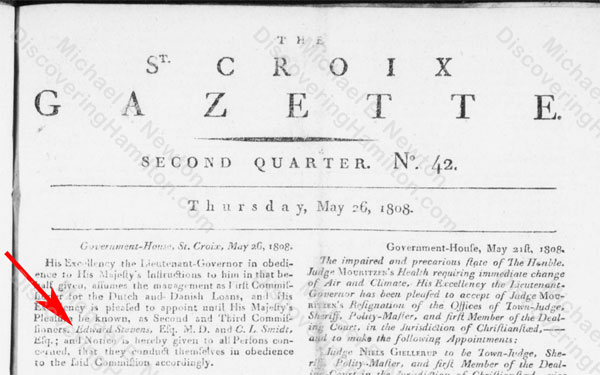 On September 29, 1808, Stevens was appointed a Member of His Majesty’s Honorable Council for St. Croix. 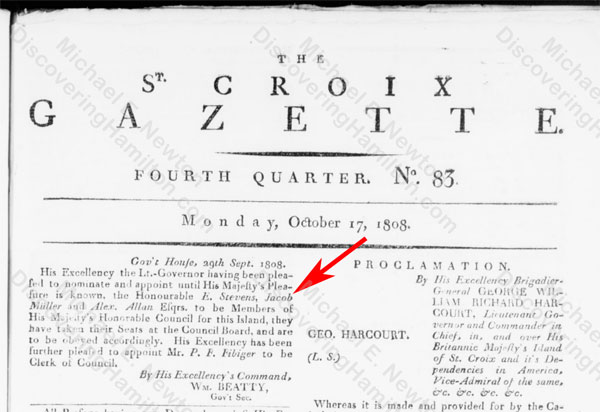 On December 19, 1809, Lieutenant Governor George Harcourt announced that “circumstances may occasion and require . . . temporary Absences” by him. Accordingly, Harcourt proclaimed that Edward Stevens, the “Senior Member of His Majesty’s Council for this Island,” would serve in the “Capacity of President of this Island and it’s Dependencies” during his “aforesaid eventual Absence.” 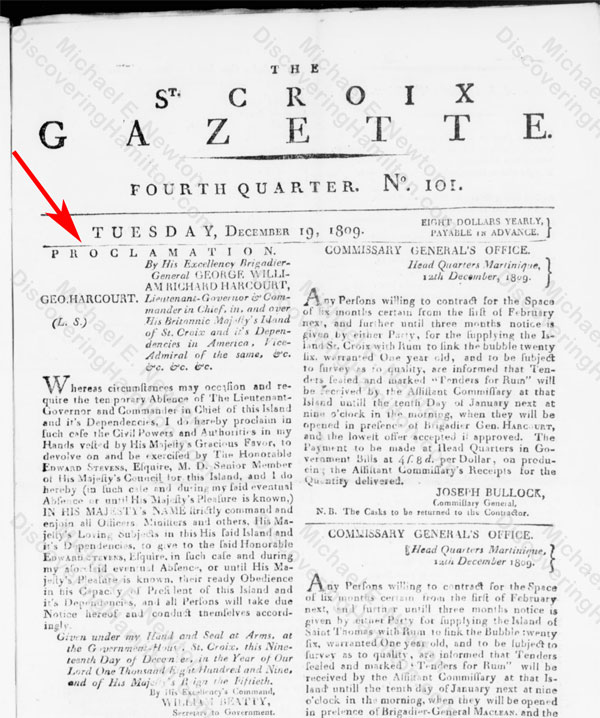 One can see Edward Stevens acting as president just 21 days later in his proclamation of January 9, 1810. 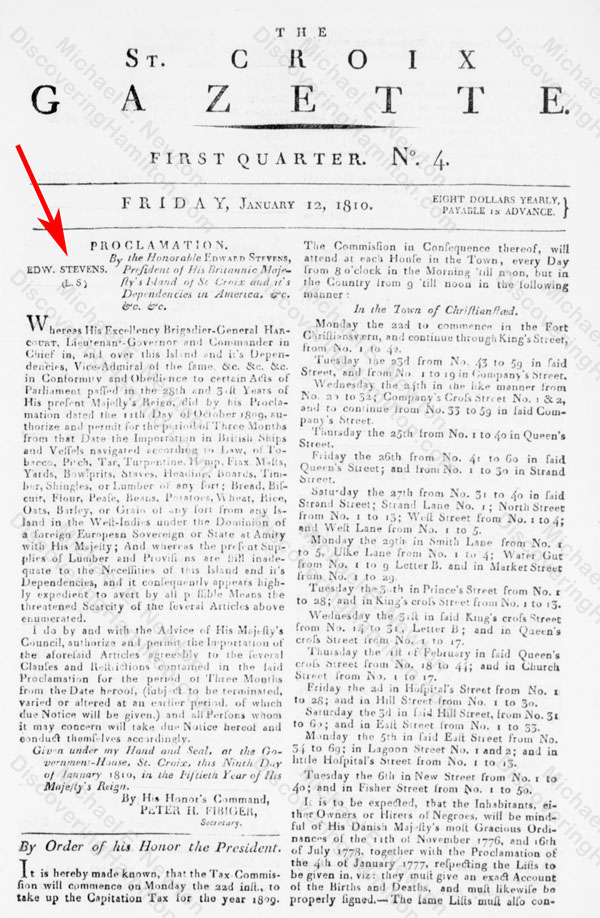 The presidency of St. Croix was a temporary position which Stevens filled until Lieutenant Governor George Harcourt returned on March 3, 1810, after an absence of about 2 ½ months. In a letter to the Burgher Council, Harcourt praised Steven’s short term as President:

In the arrangements adopted for the administration of the Civil Department during my Absence, my boundless Duty was to provide for the preservation of His Majesty’s right, and for the happiness, welfare, and prosperity of His Subjects in this Island.

These great and important Trusts could not be reposed in the hands of any Man, more fully qualified in every possible respect to hold them, than the Honorable Councellor Stevens, That he has fulfilled them to your Advantage, and his own Honor,—that he has maintained unimpaired that confidence which you are pleased to record, and that to the general respect and regard he so justly experiences in private life, he has now to add this your Testimony,—will be as lasting a Source of gratification to him henceforward, as it is of real joy to me, in finding his measures and Conduct to have so fully justified and confirmed the high opinions I entertain of him. 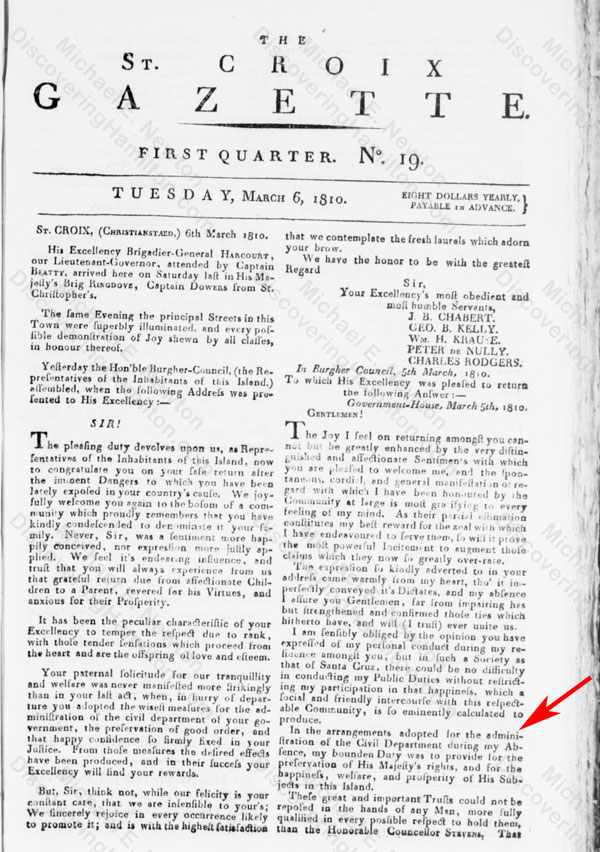 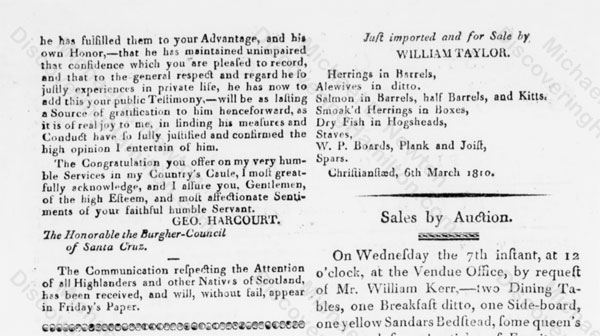 With the end of the Napoleonic Wars, the United Kingdom returned control of St. Croix to Denmark in April 1815. 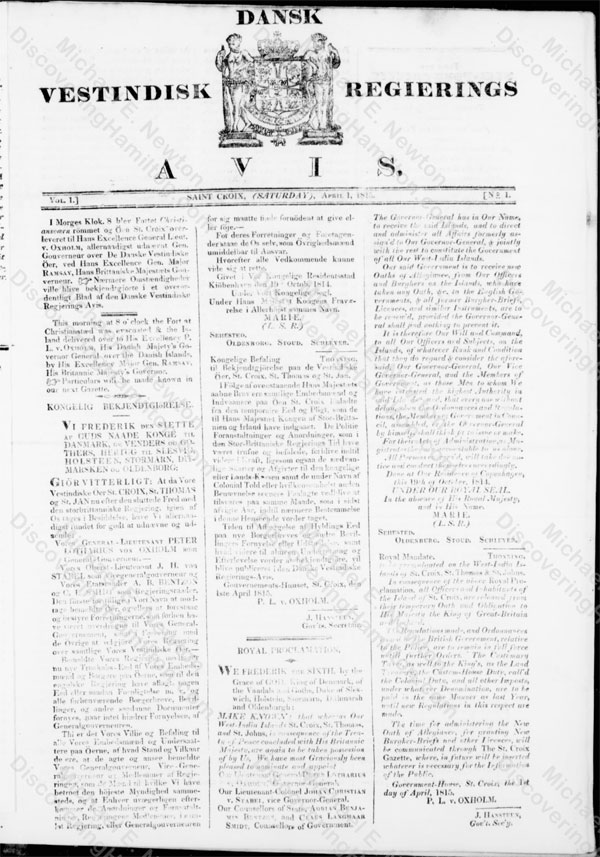 St. Croix Under the United States

St. Croix remained a Danish possession until the United States acquired it along with the other Danish West Indian colonies in 1917.

As U.S. citizens, Cruzans (or Crucians) now have a president, i.e., the President of the United States. More than two hundred years ago, they also had a president for a brief period of time, namely Dr. Edward Stevens, who served as president of St. Croix for about 2 ½ months in 1809–10.

© Posted on November 12, 2018, by Michael E. Newton. Please cite this blog post when writing about these new discoveries.