Since writing the above about William Iles Jr., additional information has been found about him, giving us a more complete picture of his life. (Ideally, this new information would be added to the already existing blog posts at their appropriate locations, but for now this gets its own post.)

It will be recalled, as noted in the summary above, that William Iles Jr. was on St. Croix at the end of 1758 along with a woman, presumably his wife. According to the matrikel (census and tax register) of that year, Iles and this woman lived on the No. 20 Dronningens Qvarteer (Queen’s Quarter) plantation which he leased from “Hendry Hodge’s heirs.”

Subsequent matrikels show that Iles leased this plantation until 1762 but had stopped living there some time in 1759. 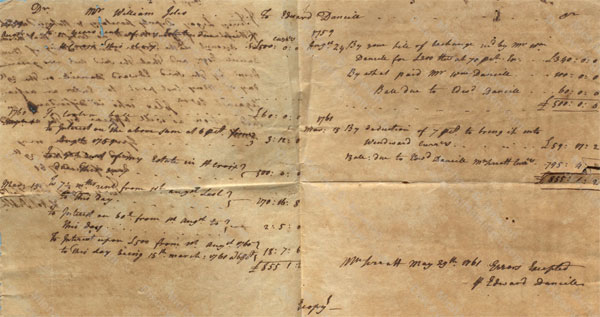 This rental period coincides with the date of William Iles’s first appearance on St. Croix in 1758. However, Iles departed St. Croix by September 1760 but continued to rent the estate until March 1761. One assumes that either Iles had a rental agreement with Daniel that he could not void when he left St. Croix or that he chose to continue renting the estate after his departure and had a manager run it for him.

None of the matrikels from this period list Edward Daniel and William Iles together, so it is impossible to determine with certainty which plantation Iles rented from Daniels. Nevertheless, the matrikel does list William Iles Jr. as leasing and living on No. 20 Queen’s Quarter, so one assumes that Edward Daniel was the heir of Henry Hodge who leased the estate to Iles.

According to an account of the planned December 1759 slave insurrection of St. Croix, one of William Iles’s slaves was acquitted of any involvement in the scheme.[2]

According to the 1759 matrikel, William Iles no longer lived at his No. 20 Queen’s Quarter plantation. Nevertheless, 53 slaves were found on Nos. 20 and 21 Queen’s Quarter.

William Iles must have owned all or some of these 53 slaves and one of them had been accused of being involved in the planned rebellion, for which he was acquitted.

Even though he leased a plantation on St. Croix, William Iles Jr. wanted more. On January 3, 1759, Iles took out a mortgage of 40,000 rigsdalers from Johann Adolph Gravenhorst and provided as collateral a plantation in St. Thomas’s North Quarter, which he presumably purchased at that time.

According to that year’s matrikel for St. Thomas, William Iles Jr. owned the sugar plantation in North Side Quarter “formerly belonging to Johan Horn’s heirs.” The matrikel shows one man living on the plantation, presumably William Iles himself, but no wife or children with him. Iles also owned 54 slaves, who worked the plantation for him. This plantation and the slaves were probably what Iles acquired with his 40,000 rigsdaler loan. 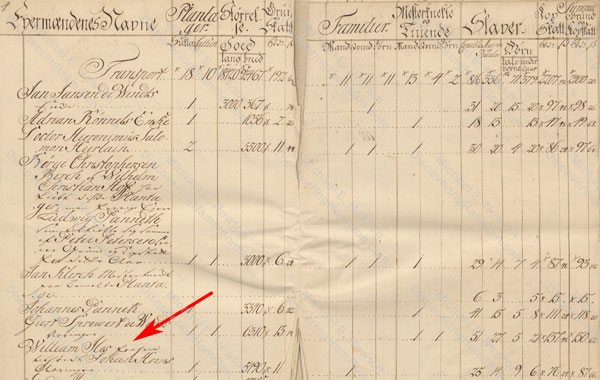 Thus, William Iles Jr. owned a plantation on St. Thomas, leased another on St. Croix, and owned slaves on both islands. He obviously was a man of considerable holdings. 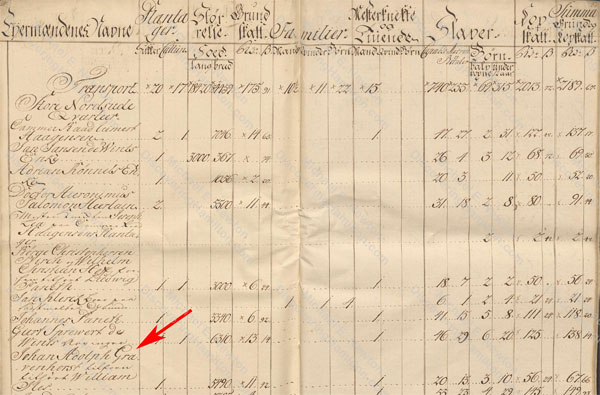 Not only did Iles lose his St. Thomas plantation, but it also appears that he fled the Danish colonies of St. Thomas and St. Croix to escape his debts because he is no longer found in the matrikels of either Danish island and is instead living on the British-controlled island of Montserrat by September 1760.

Fleeing the Danish islands for Montserrat, William Iles still owed £795 4s to Edward Daniel for the estate he rented on St. Croix. Daniel entered into an “action” against Iles in May 1761, but it was difficult for Daniel to collect since Iles was now living in a different jurisdiction. The records that have been found show that no resolution of this “action” had been reached by January 1762. It is not known whether Edward Daniel ever recovered the £795 4s that William Iles Jr. owed him. 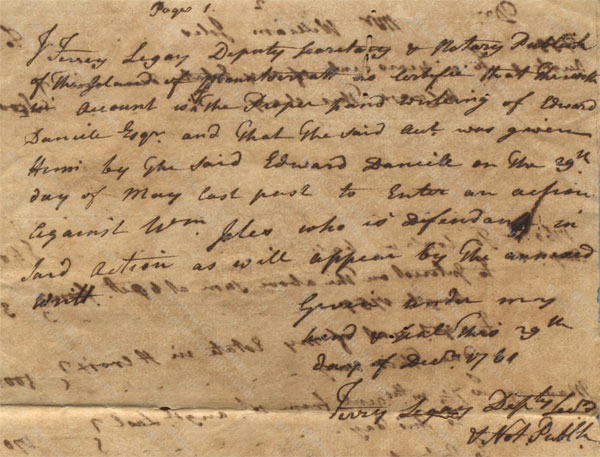 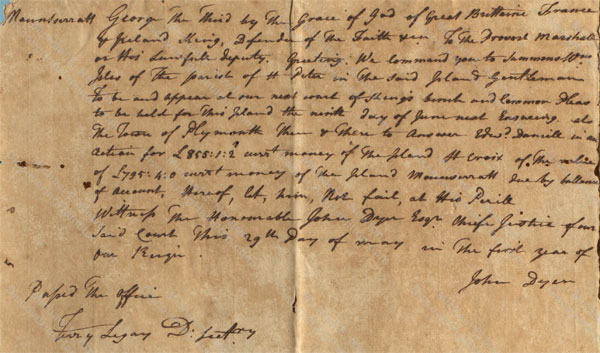 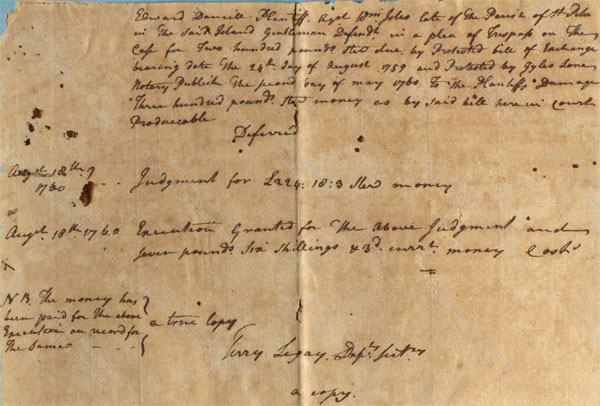 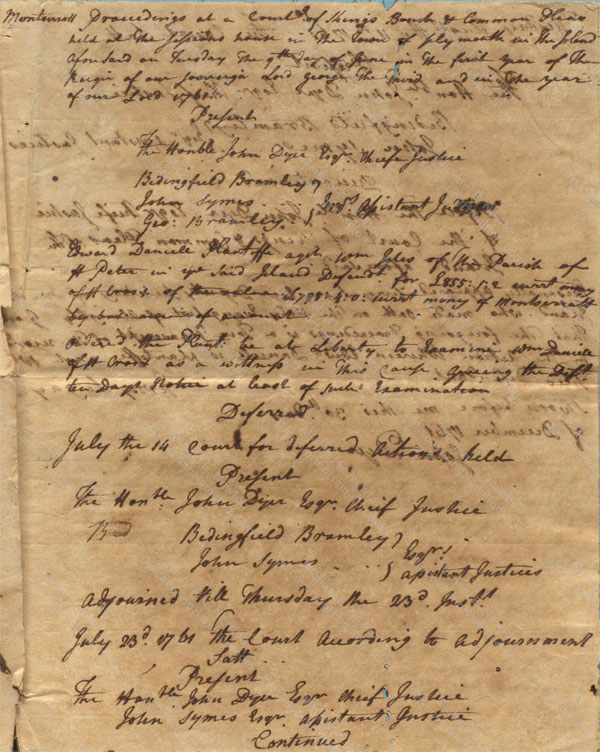 As you can see, the story of William Iles Jr. is quite complicated and there is much uncertainty due to the scarcity of evidence. Moreover, nothing has been found regarding Iles’s later life, including the date and location of his death. Relying on scattered records from multiple islands give us a partial but incomplete picture of this first cousin of Alexander Hamilton.

Perhaps a more thorough search of the records of St. Thomas or Montserrat will yield additional details, but I have not done so and do not plan to because the records of those islands are largely irrelevant to my general research into Alexander Hamilton, his immediate family, friends and colleagues.

I am heading to New York City for a couple of weeks. I probably will not be writing any blog posts while I am away.

© Posted on November 26, 2018, by Michael E. Newton. Please cite this blog post when writing about these new discoveries.