Several months ago (see part 1, part 2, and part 3), I wrote about Jemima Faucett Iles Gurley, the sister of Rachel Faucett and the aunt of Alexander Hamilton. I also introduced Jemima’s children, including Lillingston Iles, who was born in 1735 and was later found on St. Croix married, working as “some sort of builder,” and “was either illiterate or incapacitated so that he was unable to sign his name but instead made ‘his mark’ on legal documents.” We also saw how Jemima had four children with William Iles, but one child’s name had not been found in the extant records. As these children of Jemima Faucett Iles Gurley were Alexander Hamilton’s first cousins and some of them may have known Hamilton on St. Croix in the late 1760s and early 1770s, any new information about them would be of interest to us.

As a quick reminder, here is the family tree that had been included with those blog posts (people in orange are husbands of the Faucett daughters):

On November 6, 1758, “Lillingstone Iles and Charles Iles of the island aforesaid [St. Croix] masons” sold a “negro boy named Cuffey now in the possession of Richard Gurley in the island of Nevis.” It looks like Charles Iles signed his name and also wrote the name of Lillingston Iles, who left his mark. 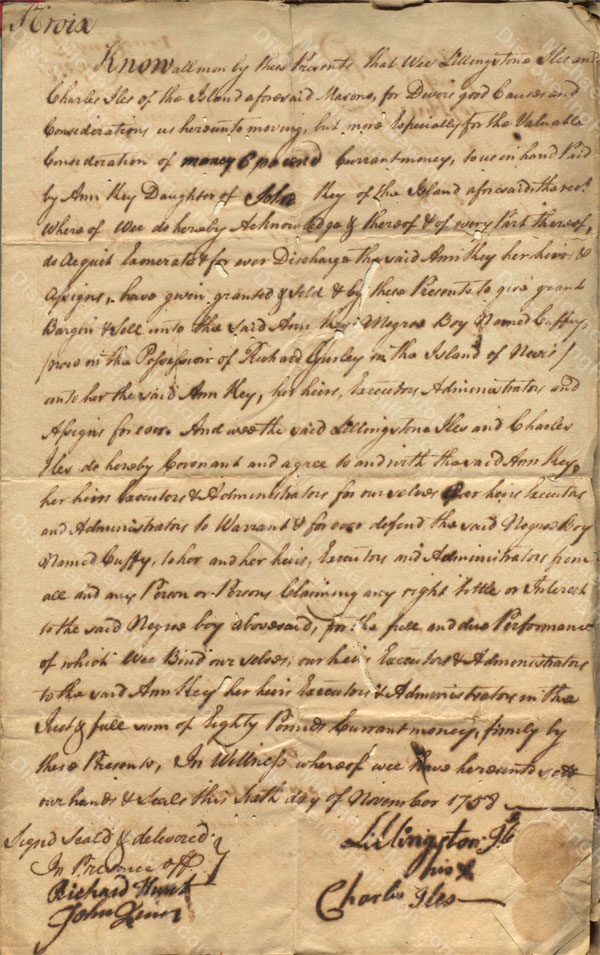 Much can be learned from this one document.

With the discovery of Charles Iles, the Faucett family tree can be updated (people in orange are husbands of the Faucett daughters):

While I have found Charles Iles in a handful of other records from St. Croix, they all date from around this same time period, i.e., circa 1758–1759, and these records tell us nothing about him or his life. I have not conducted an exhaustive search, but my previous investigations and additional cursory searches through St. Croix’s matrikels (census, land, and tax registers), church registers, and probate records have yielded nothing so far. The failure to find additional information suggests that Charles Iles, like his brother Lillingston, was not a man of prominence and owned no taxable property, i.e., land or slaves not rented to others. Accordingly, little if anything more may be learned about these brothers, at least one of whom was on St. Croix alongside Alexander Hamilton.[1]

© Posted on November 19, 2018, by Michael E. Newton. Please cite this blog post when writing about these new discoveries.