Only a few records of James Hamilton, Alexander Hamilton’s father, are known to exist. I have previously written about James Hamilton’s birth, his early business career and move to St. Kitts, and his visit to or residence on St. Eustatius (see parts 1, 2, and 3). In addition to the new findings included in those blog posts, I have also discovered a number of new records regarding James Hamilton on St. Croix, Bequia, and St. Vincent. Rather than share these new discoveries by themselves, a chimerical task without providing the proper context, I will continue to tell James Hamilton’s story, as best I can, in chronological order, incorporating the new discoveries into the general story of his life. As a result, the previous blog posts about James Hamilton and those to follow will provide the most up-to-date and comprehensive narrative of James Hamilton’s life.

On April 1, 1765, Alexander Moir of St. Croix announced his intention to leave for Europe during the month of May and asked his creditors to submit their claims against him. 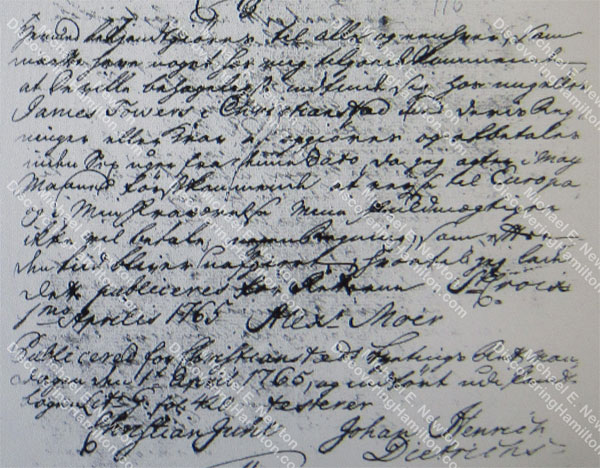 Alexander Moir was a partner with Alexander Gordon on commercial ventures. At this time, Moir and Gordon were dissolving their partnership and in the midst of arbitration. 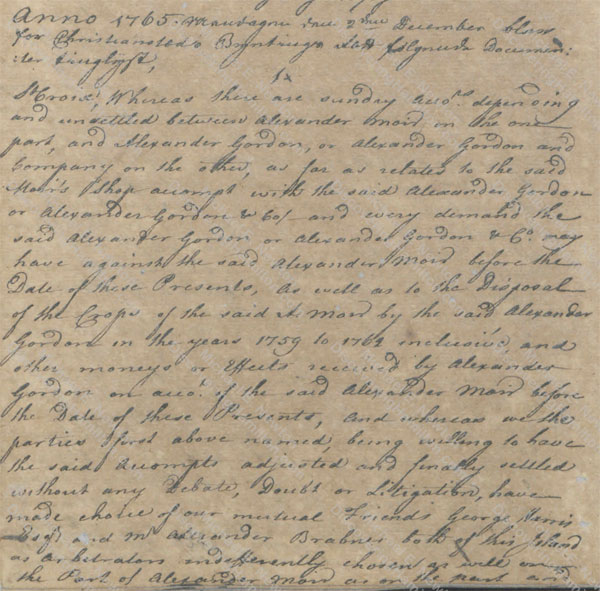 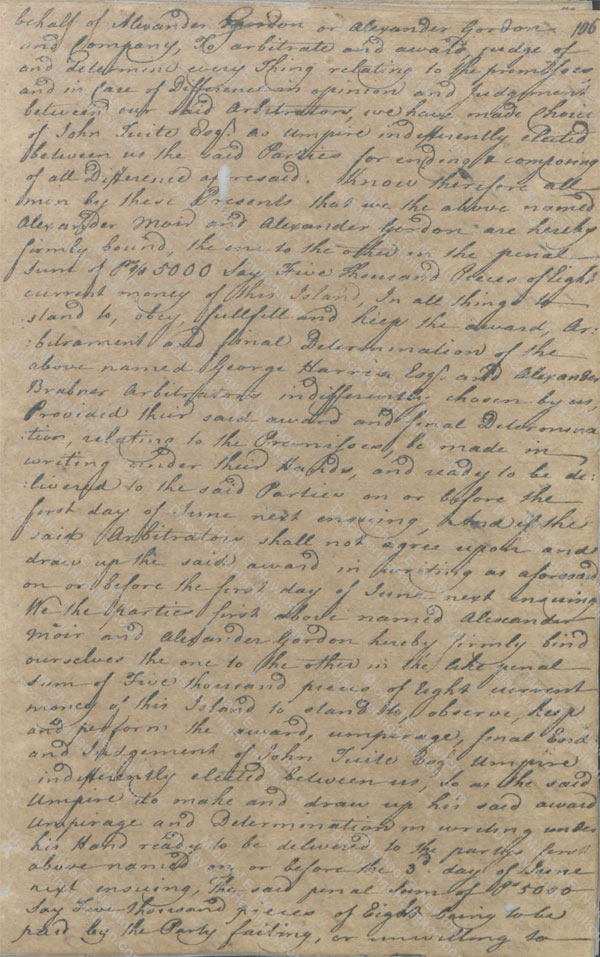 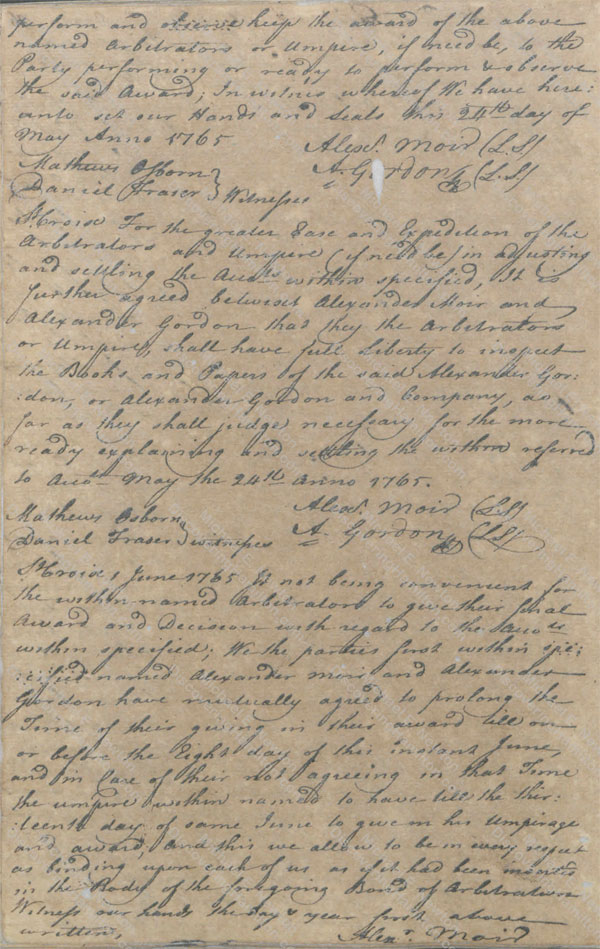 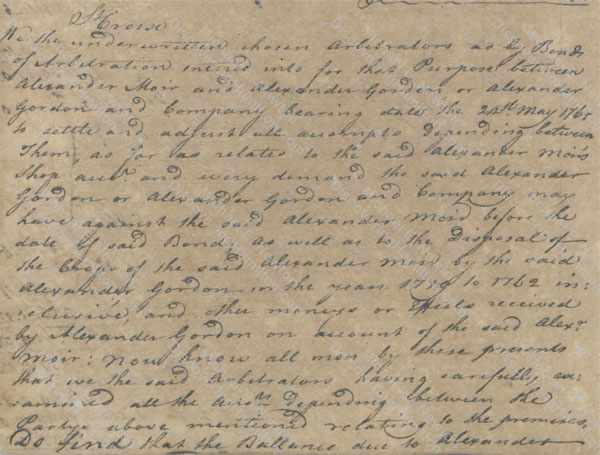 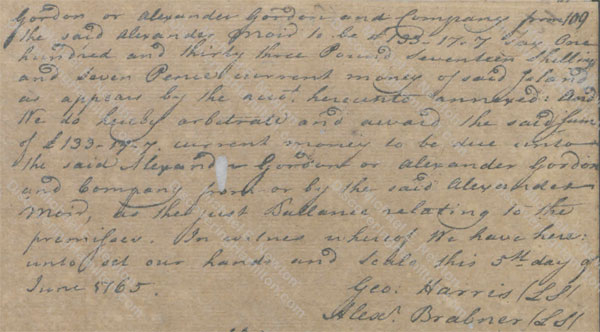 Archibald Ingram of St. Kitts sent James Hamilton to St. Croix to collect a debt from Moir & Gordon, as will be seen in the next section.

It is not clear when James Hamilton came to St. Croix, but one assumes it was in April 1765 because Alexander Moir announced on April 1 that he planned to leave during the month of May. If Ingram and Hamilton wanted to submit their claim before Moir departed, Hamilton would have had to arrive in April to be safe.

After months of waiting, James Hamilton finally won his court case against Moir & Gordon on December 14, 1765. The original debt of £400 sterling had accrued interest of £22 5s 4d over the past five and a half months. An additional £2 2s 3d was tacked on for “½ percent on the whole according to law.” This sum was then converted from pounds sterling to “windward currency” and then to “St. Croix currency” and an additional £24 6s in court charges were added, bringing the total to £807 11s 11¼d “Currency St. Croix.” James Hamilton collected this sum from “Alexander Gordon and Company / or Alexander Moir and Alexander Gordon as Co-partners” on January 8, 1766. The receipt, a copy of which was transcribed into the official record, was signed by “James Hamilton, att[orne]y for Archibald Ingram.” (“Attorney” in this sense does not mean that James Hamilton was a lawyer, but rather that he was acting as a legal representative with a power of attorney.) 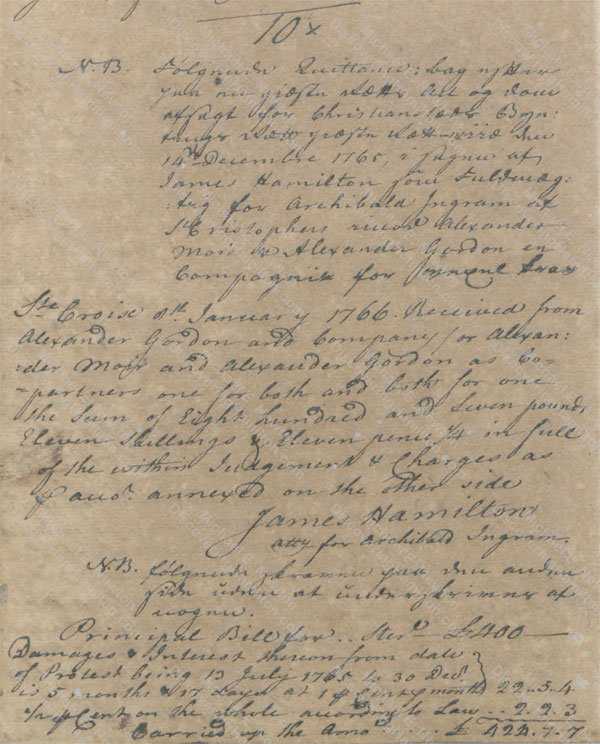 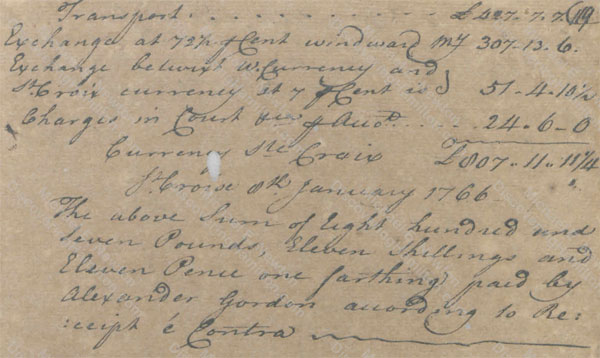 Even more perplexing is that James Hamilton’s wife Rachel appears in the matrikel along with two boys and one slave. (Rachel is listed as Rachel Fatzieth, an odd way to misspell Faucett, but we know this is her because later matrikels list this same person as Rachel Levin [Lavien].)

Why would Rachel appear in the matrikel without her husband if he was still on St. Croix? And if James Hamilton returned to St. Kitts to give Archibald Ingram his money, why did Rachel and the children stay behind?

There is much speculation regarding this phenomenon, but this is not the place to discuss it. I evaluated the various theories and possibilities in Alexander Hamilton: The Formative Years and refer you to that analysis.

On June 25, 1766, James Hamilton acted as a witness to a mortgage document and signed his name to it. The original document is lost. All that remains is a copy found in the official registers. 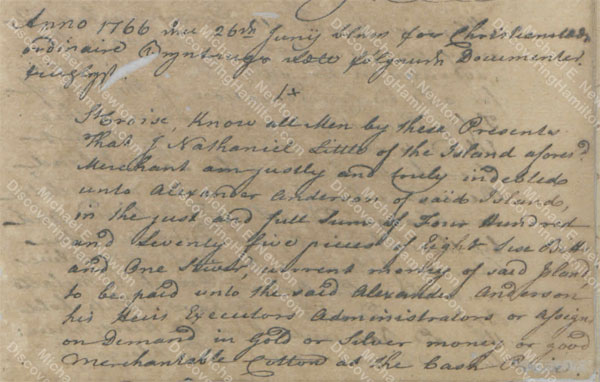 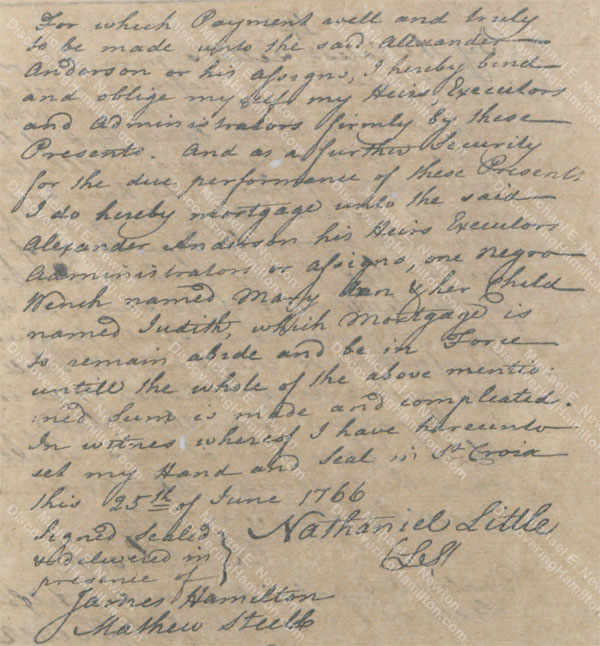 Unfortunately, as a copy, James Hamilton’s signature on this document is also a copy and therefore cannot be compared to known James Hamilton Sr. signatures.

If the above legal witness was James Hamilton Sr., father of Alexander Hamilton, it would suggest that either James Hamilton stayed on St. Croix after collecting the debt or that he returned to visit the island, perhaps related to his work for Archibald Ingram or to visit his wife and sons.

Either way, James Hamilton Sr. must have left St. Croix by February 1768 because he certainly was not on the island when Rachel died and his children were taken in by the Lyttons.

James Hamilton’s story will be continued next week…

© Posted on June 11, 2018, by Michael E. Newton. Please cite this blog post when writing about these new discoveries.