What did James Hamilton do for work in the seventeen years between 1748 and 1765? Was he a watchman or weighman at the port of Basseterre, St. Kitts, the entire time? When did he start working for Archibald Ingram? Was this a full-time or part-time job?

According to the custom journals of St. Croix, Captain John Davis “of Christiansted” and his brigantine arrived in Frederiksted from Puerto Rico on February 11, 1765, and was soon to depart for St. Thomas. 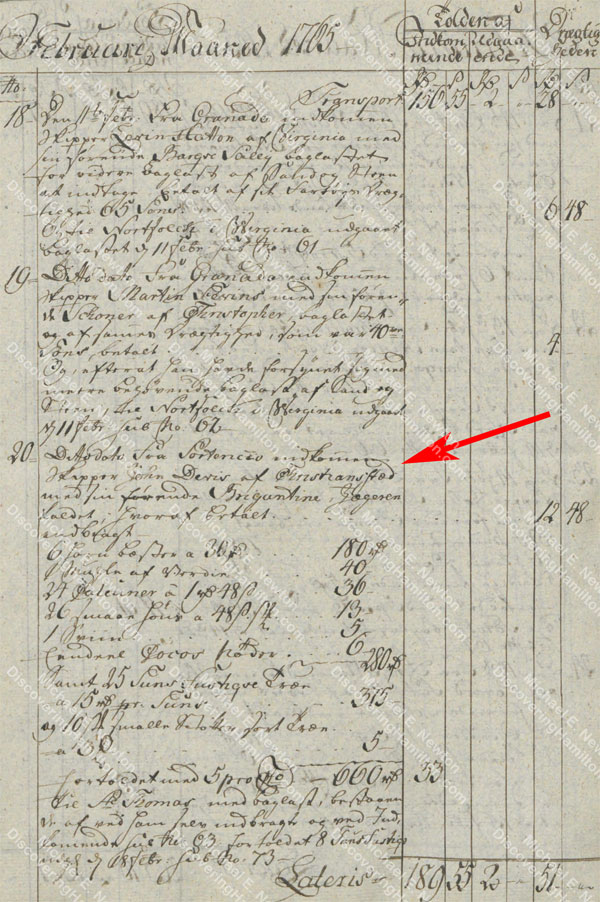 Captain Davis returned from St. Thomas to Frederiksted on February 22, 1765. 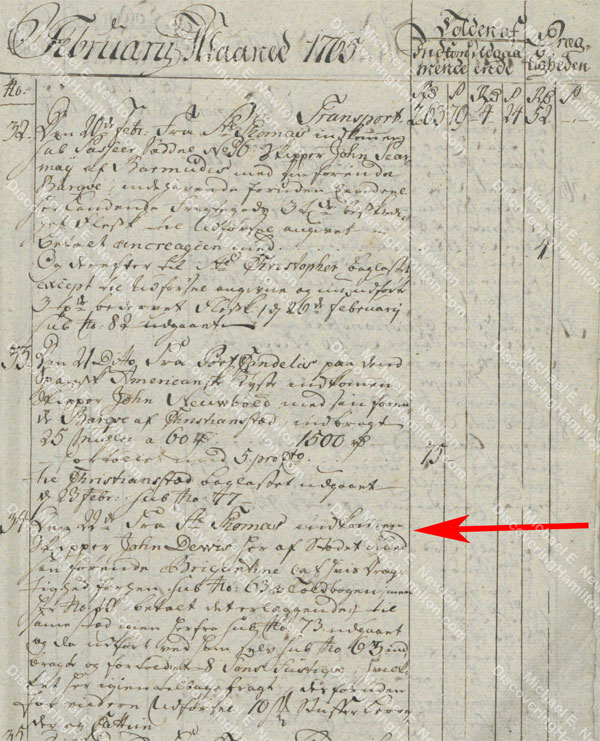 At some point over the next few days, John Davis sailed from Frederiksted to Christiansted. On March 5, 1765, Davis returned to Frederiksted and on that same day was outbound for Puerto Rico. 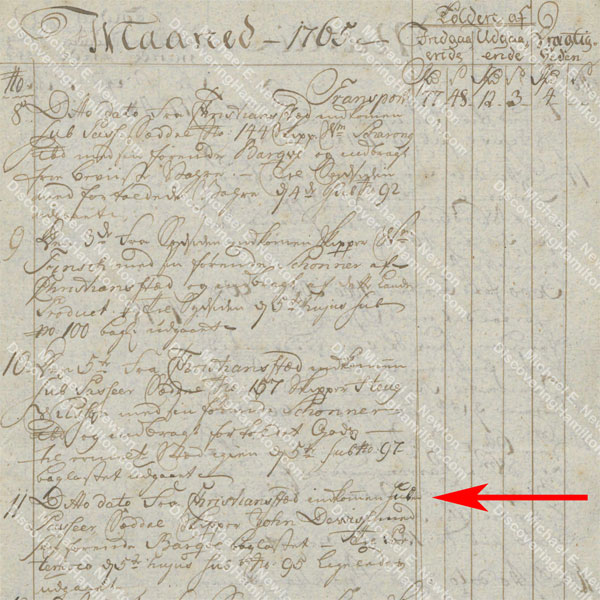 John Davis returned to St. Croix on April 6 and then was outbound from Christiansted for Tortola on May 23. (The long gap between his arrival and departure could be the result of the events that are discussed below. The custom journals for Christiansted from January to April 1765 are missing. Entries during this missing period could have perhaps filled in this and other gaps.) 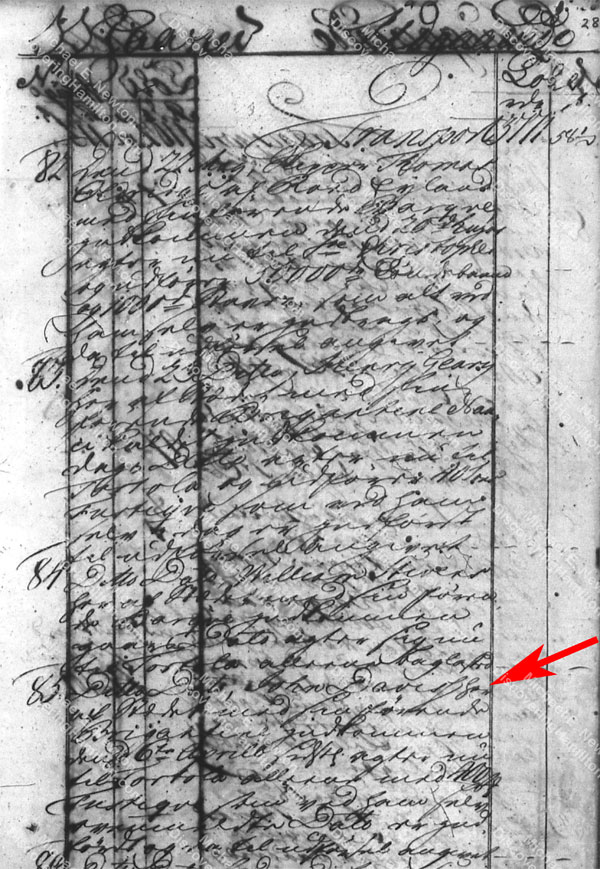 John Davis, now captain of a 25-ton barque “of Jamaica,” returned from the Spanish coast [Florida or the Gulf Coast?] to Frederiksted on June 11 and was outbound for New York on June 17. 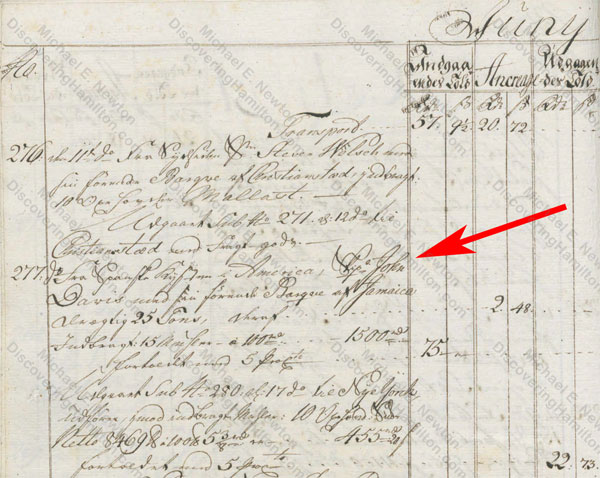 One man who sailed with John Davis on some of the above voyages was James Hamilton. Upon their return to St. Croix on April 6, John Davis and James Hamilton had a falling out and the matter was taken to court. (A Hendrich Ovid was involved in an identical dispute with Davis, but we’ll focus solely on Hamilton’s legal case.)

On May 23, 1765, the same day that John Davis was outbound for Tortola, St. Croix’s lower court ruled on this case. Unfortunately, the lower court record has not been found.

On May 29, 1765, St. Croix’s appeals court took up the case of “John Davis Contra Matros James Hamilthon [John Davis against sailor/seaman James Hamilton],” but immediately postponed the case until June 5. 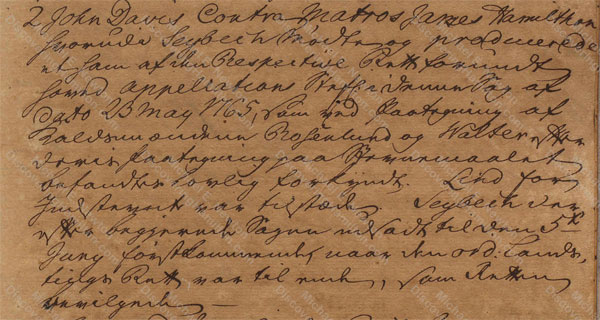 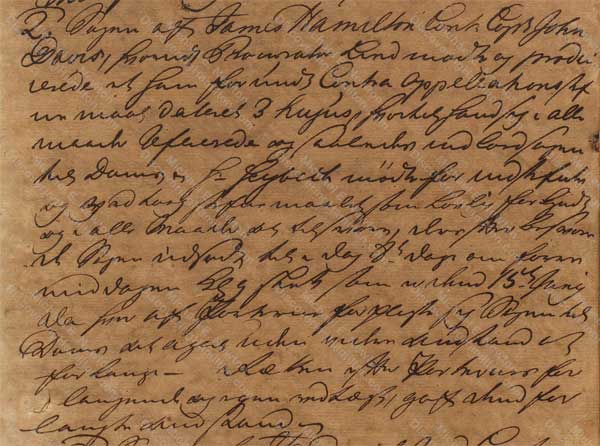 Finally, on June 19, 1765, the appeals court took up the matter of “John Davis Contra James Hamilthon.” According to the appeals court record, John Davis claimed that James Hamilton had been contracted for a voyage from St. Thomas to St. Croix, then to Puerto Rico, and finally back to St. Croix or St. Kitts. Hamilton, however, left the ship without the captain’s permission after its second return to St. Croix and refused to continue with the ship to St. Kitts. Davis argued that the ship stopped in St. Croix not to unload cargo but for other reasons and therefore Hamilton was still under contract to sail to St. Kitts with the ship and its cargo. The lower court had sided with Davis on May 23, 1765, but Hamilton appealed that decision. In front of the appeals court, Hamilton argued that he had served on the ship and performed his duties from St. Thomas to St. Croix, from St. Croix to Puerto Rico, and then back again to St. Croix, where the voyage according to the contract was to end, and had even remained in service aboard the ship for several days after its return to St. Croix. Moreover, Hamilton argued that Davis had refused to increase the wages of his crew for the additional stop and had not paid them at all for their service. 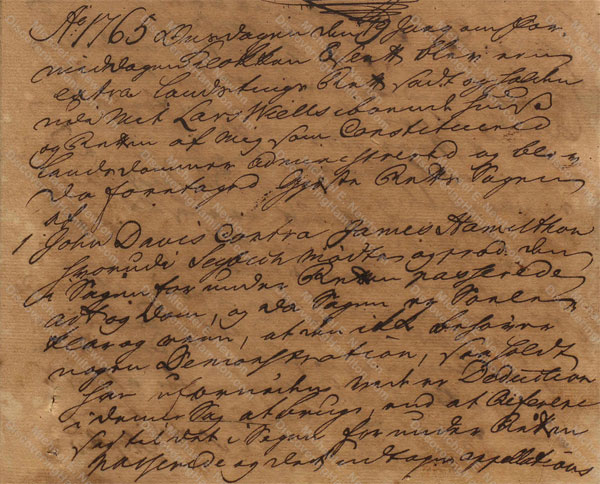 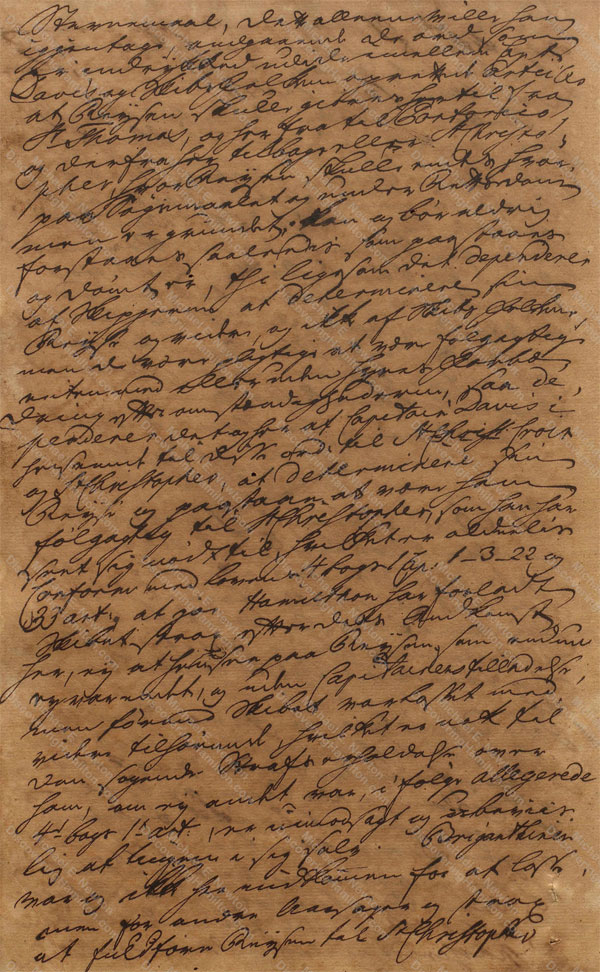 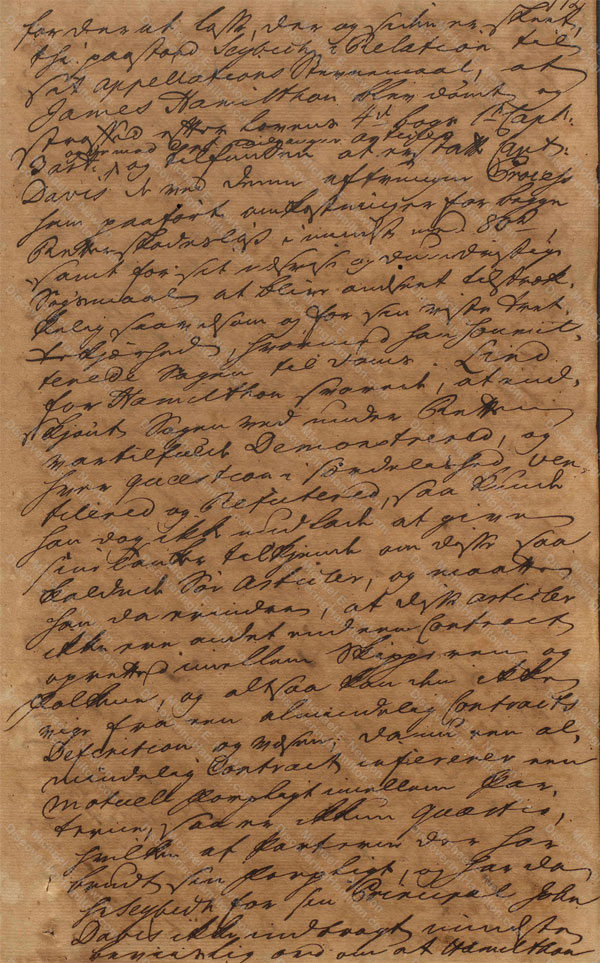 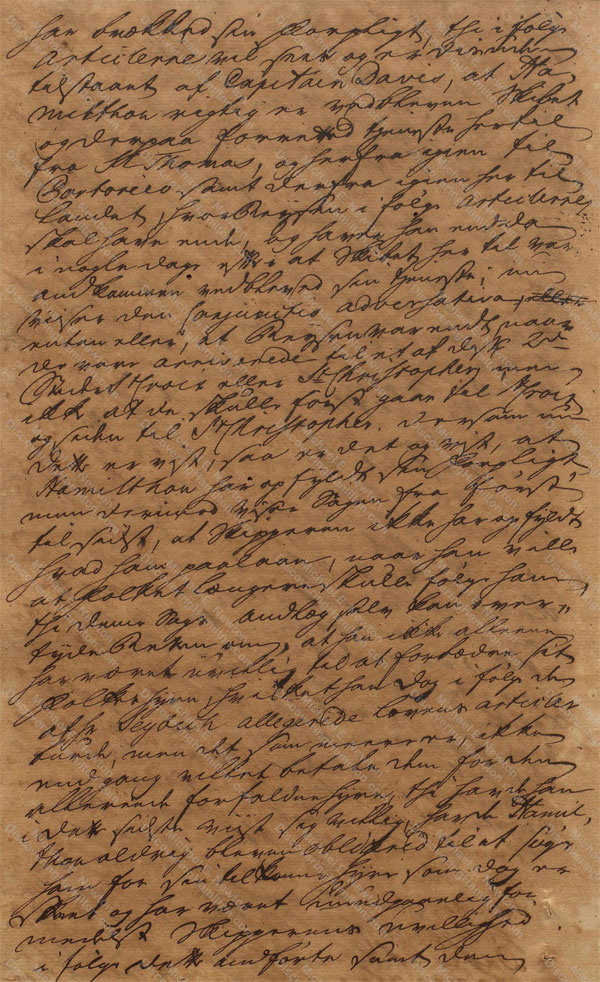 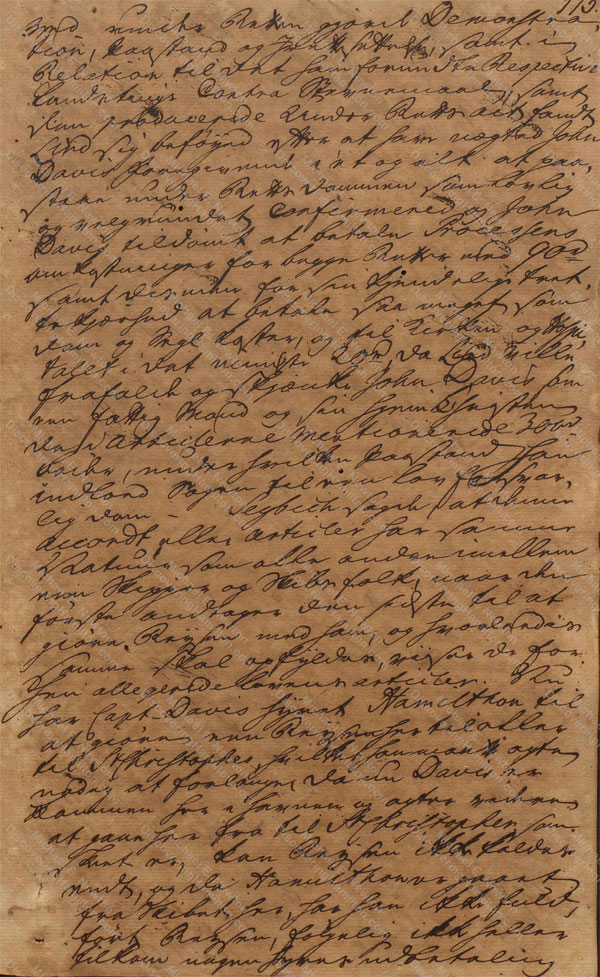 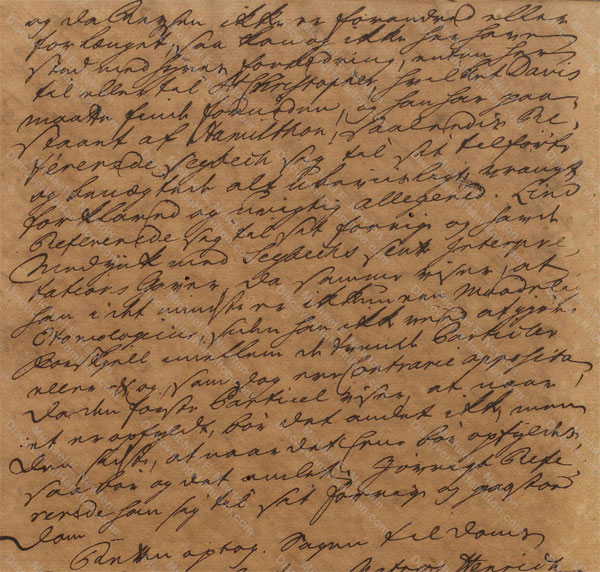 Ten days later, on June 29, 1765, the appeals court issued a judgement in the case of “John Davis Contra Matros James Hamilthon,” but unfortunately it was not recorded in this volume and has not yet been found elsewhere.

Perhaps, this judgment along with the lower court record will eventually be found and those will provide additional details regarding the above voyage and legal dispute.

Is This Our James Hamilton?

As a result of these newly discovered records, a number of details regarding James Hamilton’s life have to be questioned or altered.

James Hamilton’s arrival with John Davis on April 6 also raises the question of when did Rachel and the children come to St. Croix. Clearly they would not have come with James Hamilton since he came as a sailor working on board a merchant vessel. Likely, James Hamilton sent for Rachel and his children after he arrived on St. Croix and decided that he would have to stay there for some time to settle this legal dispute and to collect the debt for Archibald Ingram.

But we do know that at some point James Hamilton left St. Croix and his family not to return. Perhaps this occurred when James Hamilton was on a lengthy voyage and was detained elsewhere, possibly by injury, illness, or legal disputes, and then was unable to return due to a lack of money and perhaps some embarrassment regarding his financial situation because Alexander Hamilton later stated that his “father’s affairs at a very early day went to wreck, so as to have rendered his situation during the greatest part of his life far from eligible. This state of things occasioned a separation between him and me.”[4]

With these new records, we now see that:

Thus, this one set of legal records results in a major rewriting of the biography of James Hamilton and the early life of Alexander Hamilton.

© Posted on June 18, 2018, by Michael E. Newton. Please cite this blog post when writing about these new discoveries.