Last week I wrote about the importance of St. Croix’s No. 9 Company’s Quarter, better known as the Grange Plantation, to the Hamilton narrative. The estate was developed by Alexander Hamilton’s uncle James Lytton, possibly hosted the wedding of Rachel Faucett (Hamilton’s mother) and John Lavien, and Alexander Hamilton buried his mother there in February 1768.

Despite its repeated appearance in the Hamilton story, few biographers give any description of the plantation and those who do describe how it looked at the time they wrote or speculate about how it must have looked in the eighteenth century. The reason for this omission was not necessarily a lack of interest but rather a lack of any known contemporary descriptions.[1]

In fact, there are three contemporary descriptions of No. 9 Company’s Quarter, the Grange Plantation.

December 1764 Description of No. 9 Company’s Quarter

When James Lytton purchased No. 9 Company’s Quarter in 1738, it was an undeveloped piece of land. By the time he sold it in December 1764, it was a thriving sugar plantation.

A description of No. 9 Company’s Quarter was included in the “indenture” (sales contract) between James Lytton and John Denn in December 1764. (As noted last week, the plantation was not called the Grange in this record nor in any known prior record.)

The “indenture” states that the plantation featured the following buildings and equipment:

The “indenture” also mentions “the burying place of the said Lytton’s family” as an exception to which the Lyttons were “at all times to have free ingress and egress to & fro.”

In addition to the land, buildings, and equipment, the sale of the plantation included:

James Lytton sold all this to John Denn for “the sum of sixty thousand pieces of eight,” about ninety-six hundred pounds sterling, equivalent to perhaps $25 million in today’s economy.[2] It should also be noted that James Lytton owned house slaves in addition to the above plantation slaves. Only the thirty plantation slaves noted in the indenture were sold to Denn. 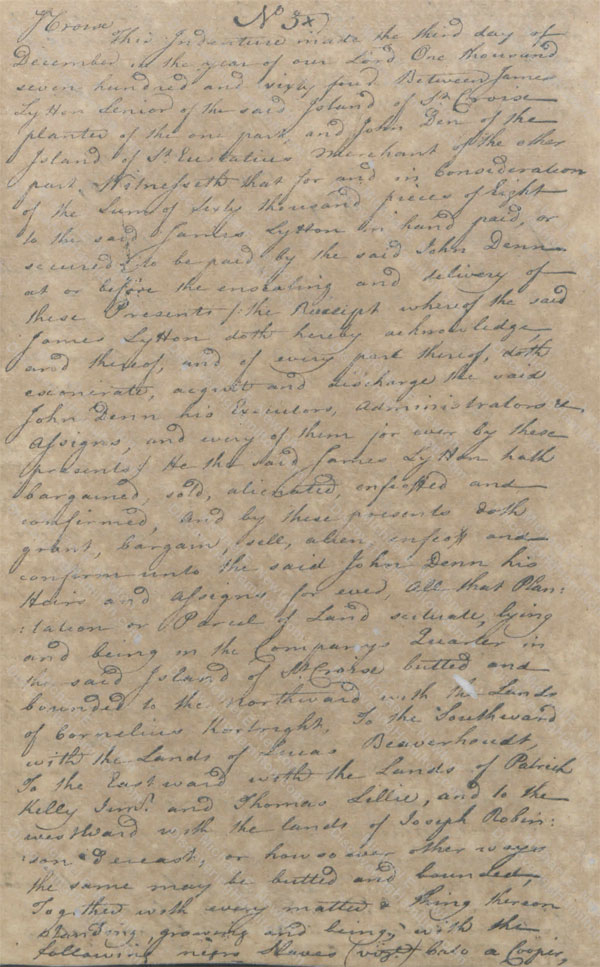 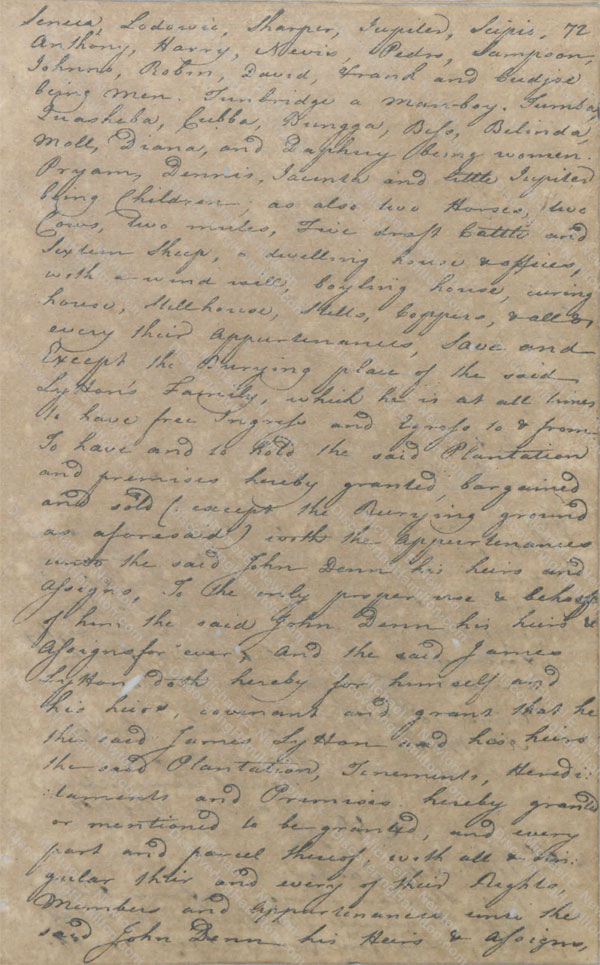 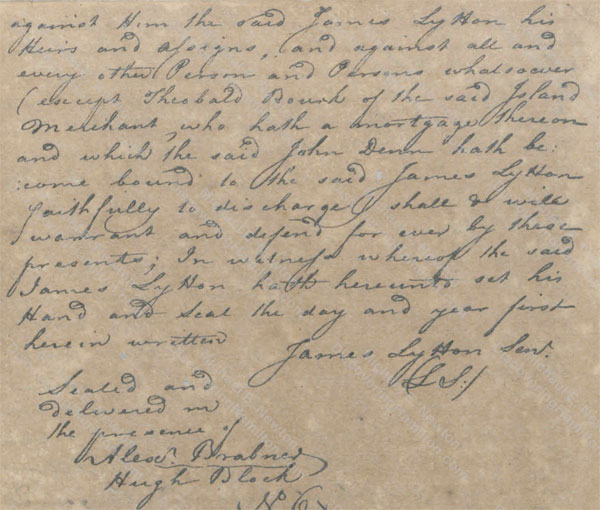 Although this accurately describes James Lytton’s No. 9 Company’s Quarter plantation when he sold it in December 1764, it is a bit light on details. There is no information about the layout of the plantation, the size of the dwelling house, the number or sizes of the offices, or the sizes of the windmill, boiling house, curing house, still house, stills, or coppers.

June 1766 Description of “the Plantation Grange”

In June 1766, an “inventory and appraisement” of “the Plantation Grange” was conducted. The plantation is the same as before and the buildings little changed, but the description of the whole is more detailed.

This description notes that the plantation was laid out as follows:

One assumes that this distribution of land under John Denn is pretty much the same as it had been under James Lytton just eighteen months earlier.

According to this “inventory and appraisement,” the “Plantation Grange” had the following buildings and equipment:

One notices that the 120-gallon still is listed as “new” and presumably this had been added by John Denn since he purchased the estate from James Lytton in December 1764. One also notes the “materials for a cattle mill.” John Denn evidently was building a cattle mill to complement the windmill that James Lytton had built there years earlier. The only other notable difference is that “negroe houses” appear in the June 1766  list but not in the 1764 description. But James Lytton had slaves working his plantation in 1764 and therefore must have had “negroe houses” even though they didn’t appear in the description of the estate. Additionally, the “dwelling house” of December 1764 is described here in June 1766 as a “good lofted dwelling house.” Clearly, it was the same house, but this provides a more detailed description than before.

According to this inventory, John Denn owned sixty-one slaves. Based on the names in both lists, many of John Denn’s slaves were the same as those who were sold to him by James Lytton in December 1764.

Also listed in the inventory of John Denn’s estate are:

Many of these animals are probably the same as those James Lytton sold him.

The estate at this date was appraised at 67,670 pieces of eight, an increase of 7,670 or about thirteen percent, largely due to the additional thirty-one slaves. 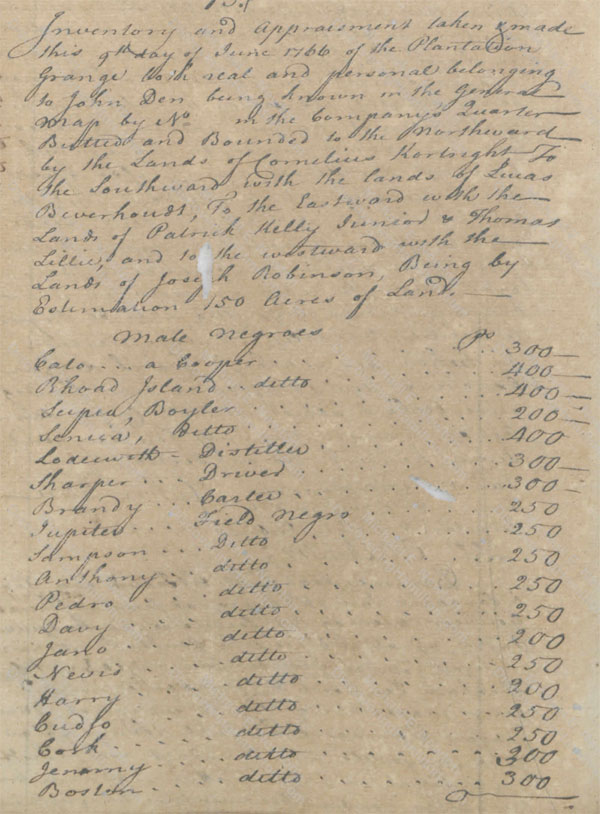 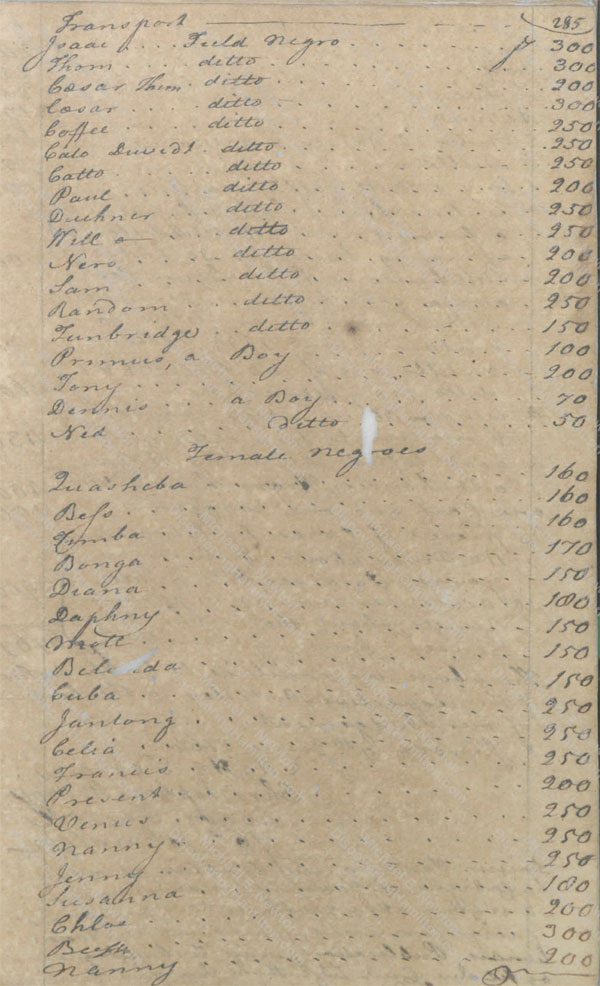 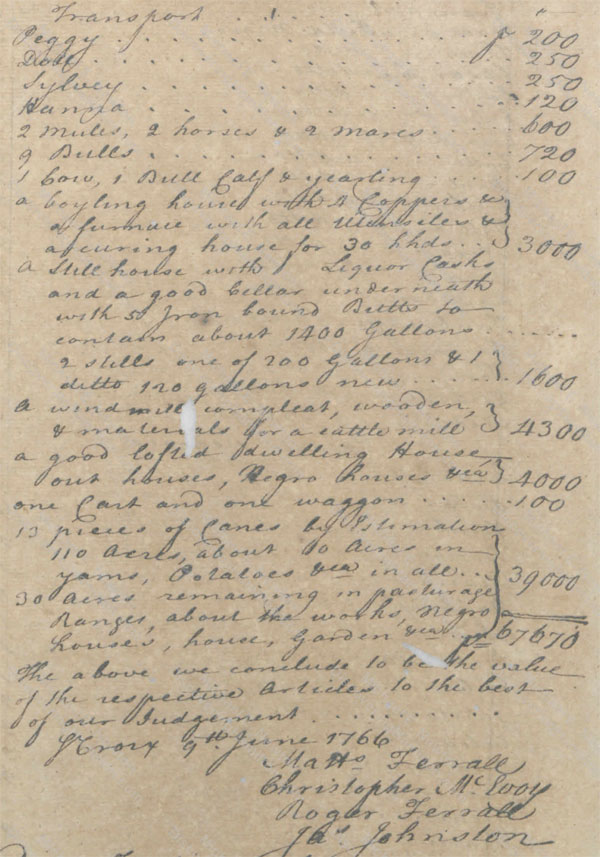 Thus, this June 1766 “inventory and appraisement” of “the Plantation Grange” describes, for the most part, the plantation as it existed under James Lytton’s ownership, but with additional details.

December 1766 Description of the “Plantation Grange”

John Denn passed away in December 1766 and his estate was appraised by the probate court. This provides yet another description of the “Plantation Grange,” the third in just two years. This description, for the most part, is the same as the previous two, but does provide some additional information.

The plantation is again described as having:

The buildings and equipment are listed as:

There were now seventy-seven slaves, an increase of sixteen from the previous inventory.

As for animals, there were now:

Again, this is little changed from before.

There are some other items listed here that were not listed six months earlier. The most significant was “110 acres in cains, we value now at ps 66.5.2 pr acre” coming to a total value of 7,333 pieces of eight. There also were “20 hogsheads of rum” and “10 hogsheads of sugar” along with some potatoes and other crops. Another addition was “one cart & one wagon,” but one assumes that these existed beforehand and were included in December 1764’s “all or every their appurtenances.” With these additions, the estate was appraised at 79,743 pieces of eight, nearly 20,000 more than James Lytton had sold it for two years earlier, the increase largely accounted for by the additional slaves and sugar cane in the field. 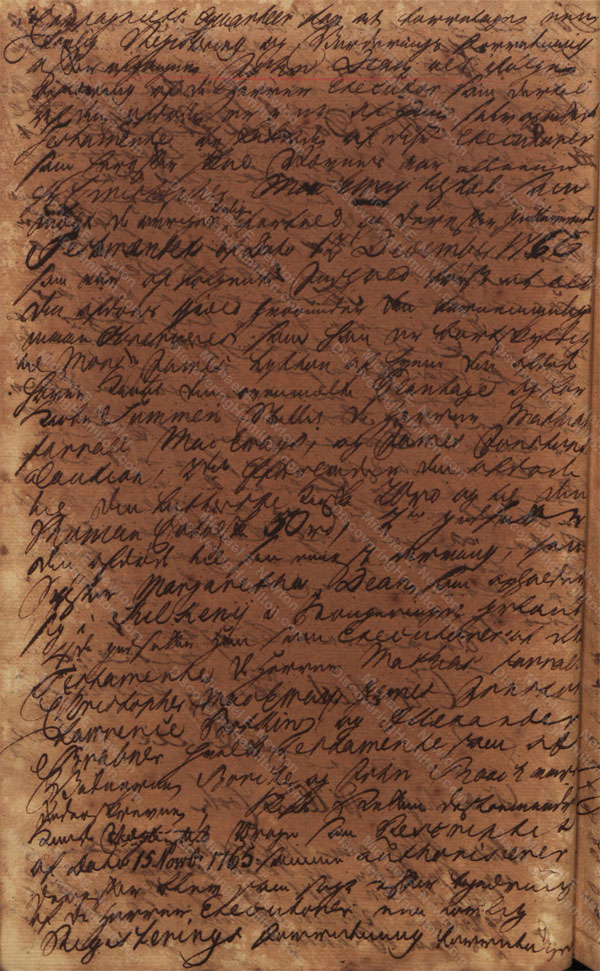 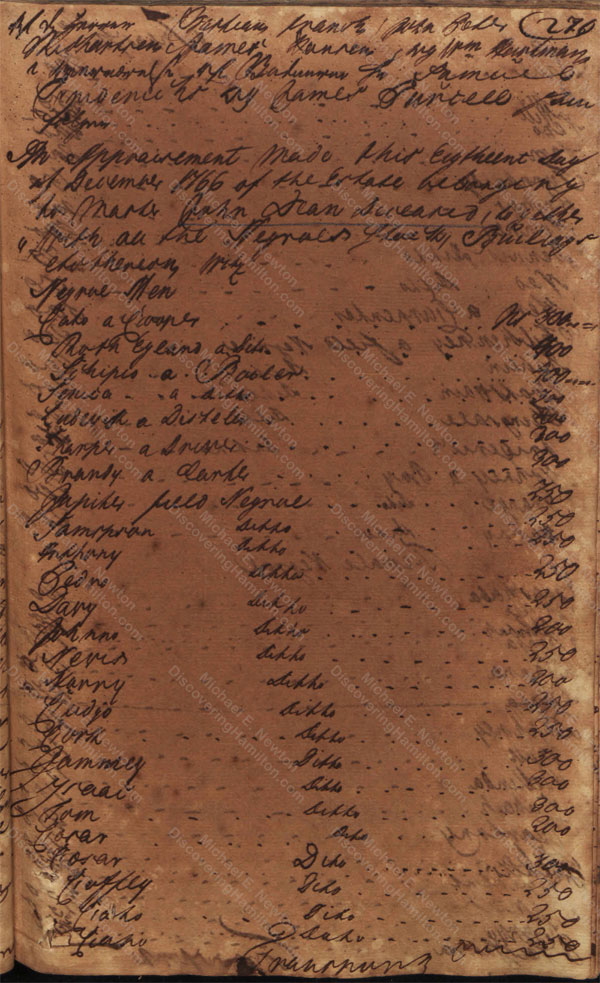 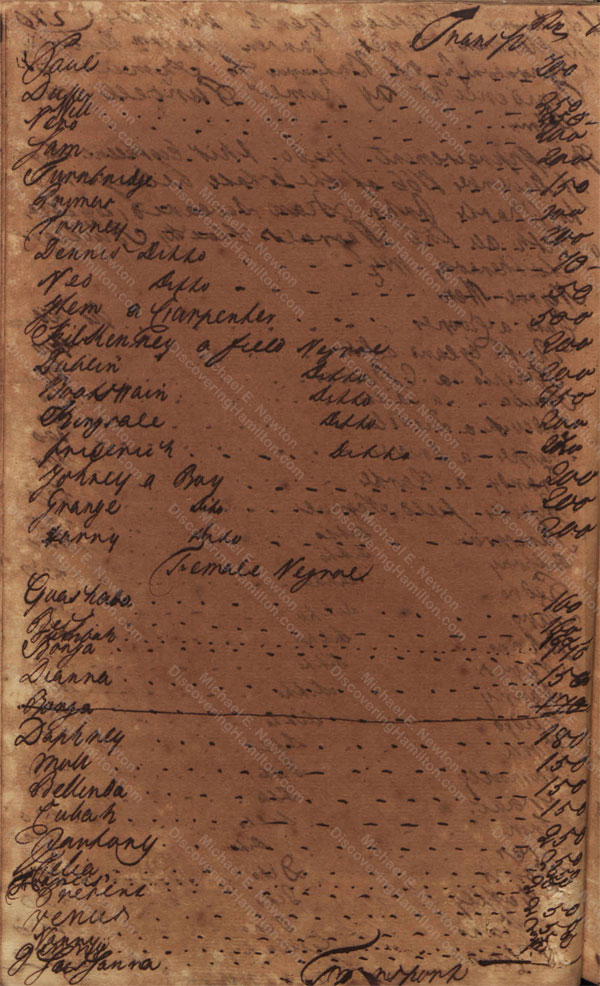 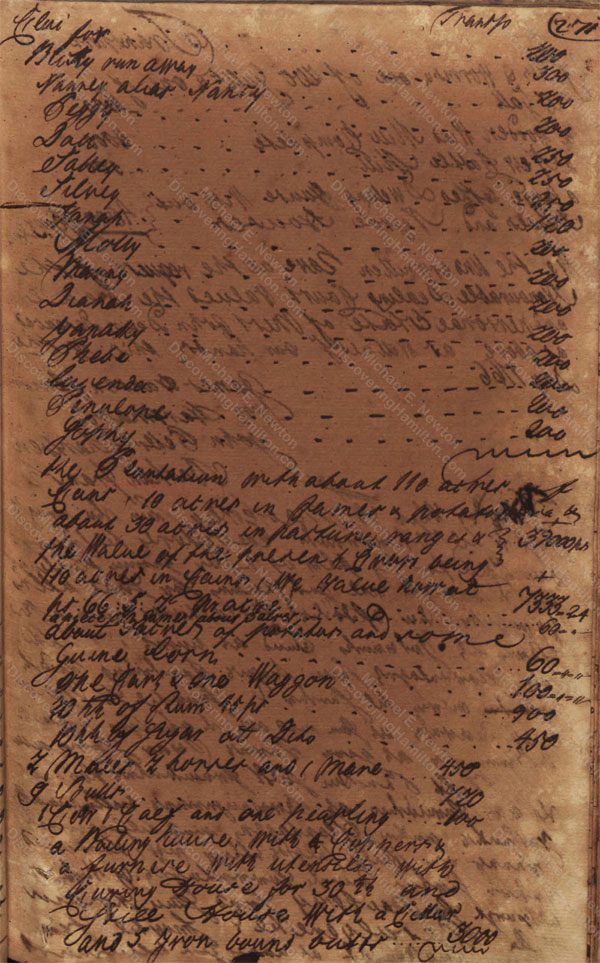 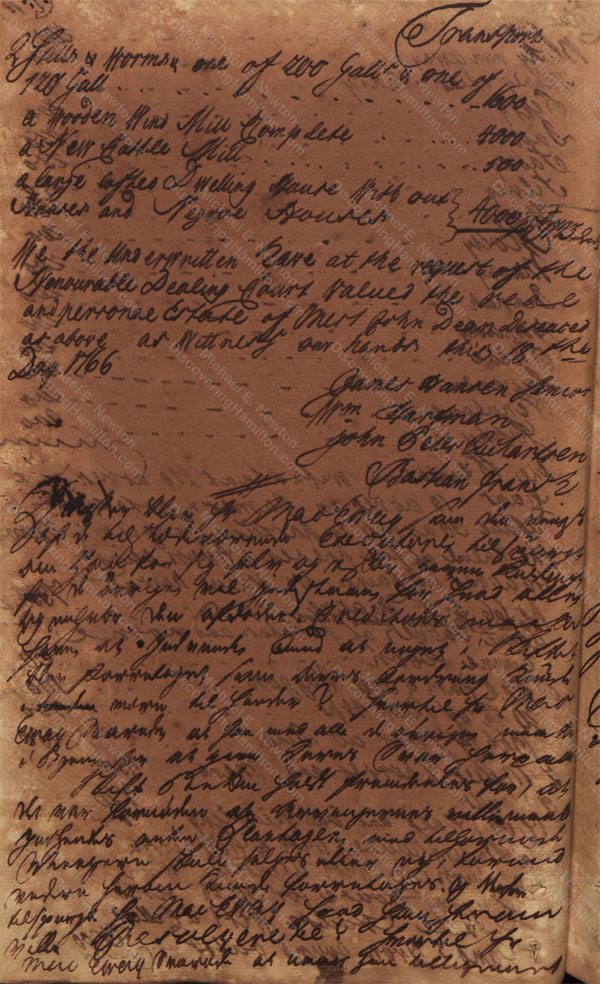 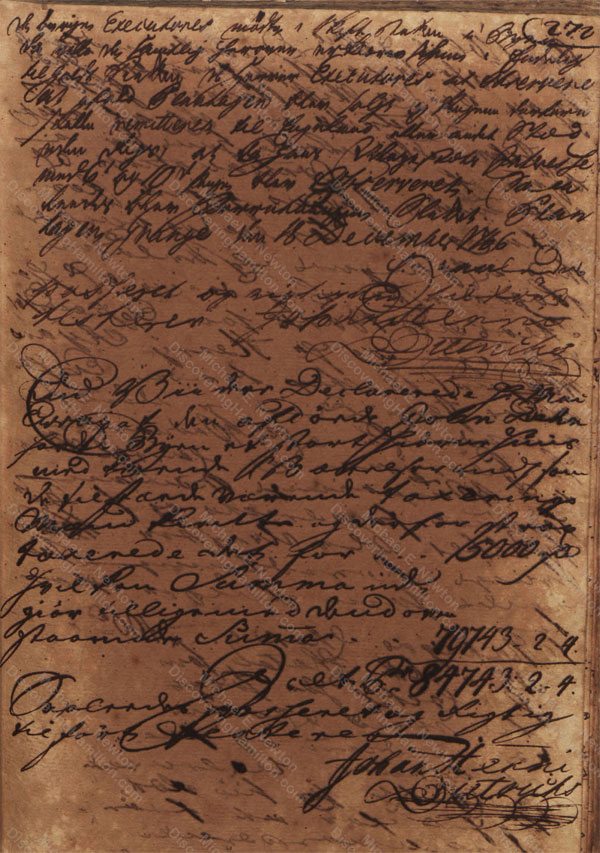 When James Lytton purchased No. 9 Company’s Quarter in 1738, the property was uncultivated. Over the next twenty-six years, Lytton cleared and planted 110 acres of sugar, built a “good” and “large lofted dwelling house,” “negroe houses,” “out houses,” “a boiling house with 4 coppers & a furnace with all utensils,” “a curing house for 30 hogsheads,” a “still house with liquor casks and a good cellar underneath with 5 iron bound butts to contain about 1400 gallons,” at least one still of 200 gallons, and “a wood wind mill.” He sold the plantation along with thirty of his slaves for a hefty sum, sixty thousand rigsdalers, in December 1764, just before the Hamiltons arrived on St. Croix. Although Alexander Hamilton would not have stayed in this house, he buried his mother there in “the burying place of the said Lytton’s family” and probably attended the funeral of others there, including his uncle James Lytton in August 1769.

As the site of his mother’s grave, Alexander Hamilton must have often visited “the burying place of the said Lytton’s family” at the Grange Plantation before leaving St. Croix in 1772. The fields of sugar cane, windmill, negro houses, dwelling house, and other buildings must have formed a vivid impression on Alexander Hamilton’s mind. Just as Hamilton “recollected” his mother “with inexpressible fondness,”[3] he surely carried a vision of her burial site and the surrounding landscape with him to North America.

[1] Actually, H. U. Ramsing must have seen at least one of the contemporary descriptions shared here today because he cited the same record in which it appears (H. U. Ramsing, “Alexander Hamilton og hans Mødrene Slaegt”). But Ramsing did not describe the Lytton plantation in his essay and the Hamilton biographers who relied upon his work did not check the original sources and therefore did not know about this description.

[2] There are numerous ways to estimate the present value of this sum. In pure commodity inflation / purchasing power terms, this today would be about $1.7 million. In income or labor earnings terms, it would be about $25 million. (“Five Ways to Compute the Relative Value of a UK Pound Amount, 1270 to Present.”) As a 150-acre productive plantation with a mansion, other buildings, slaves, etc., $1.7 million definitely underestimates the value of the estate and $25 million is probably the best way to think of the value of this plantation in modern terms.