Ignoring the open question regarding the location of the wedding of Rachel Faucett and John Lavien, we will focus instead on the name given to the Lytton plantation. Was it known as the Grange when the Lyttons lived there? Was it known by that name when Rachel Faucett, Alexander Hamilton’s mother, was buried there? Or was it given this name sometime later?

St. Croix’s property, tax, and census lists, known generally as the matrikels, record each plantation by their number and quarter. For the first sixty years that such records were kept, the matrikels do not give the names of the plantations. For example, here is the first page for Company’s Quarter in the 1763 matrikel, which includes James Lytton’s plantation at No. 9 Company’s Quarter. 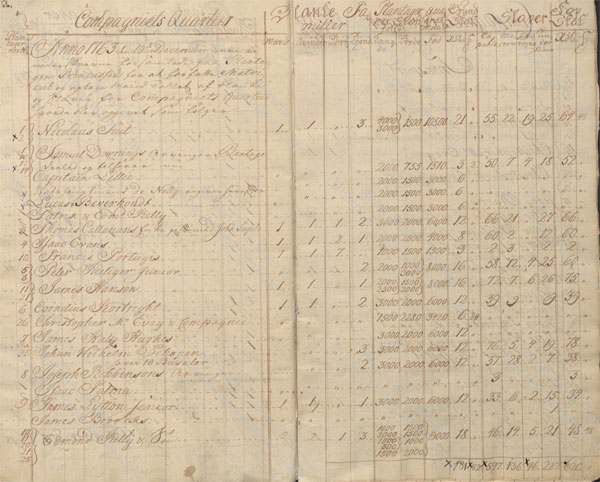 It was not until 1803 that the matrikels included the names of the various plantations. 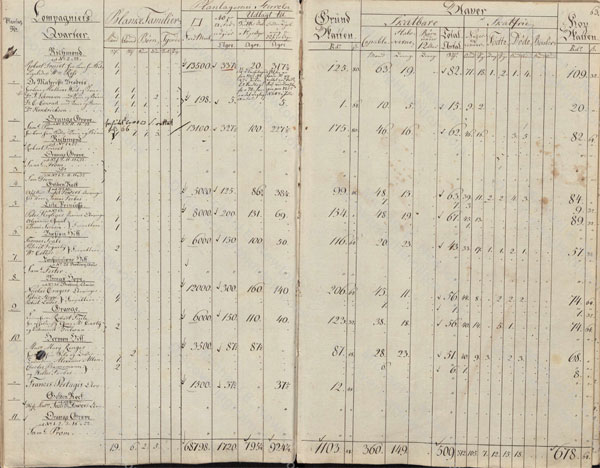 So when did No. 9 Company’s Quarter become the Grange? Was it in 1803 when the name first appeared in the matrikel? Or was it at some earlier date?

An extensive search through St. Croix’s records has yielded no mention of the Grange during James Lytton’s ownership of the plantation.

For example, the land deeds register compiled in 1751 lists “James Lytton Plantagie [Plantation] No. 9” in “Compagniets Quarteer [Company’s Quarter].” No mention of the Grange is made. 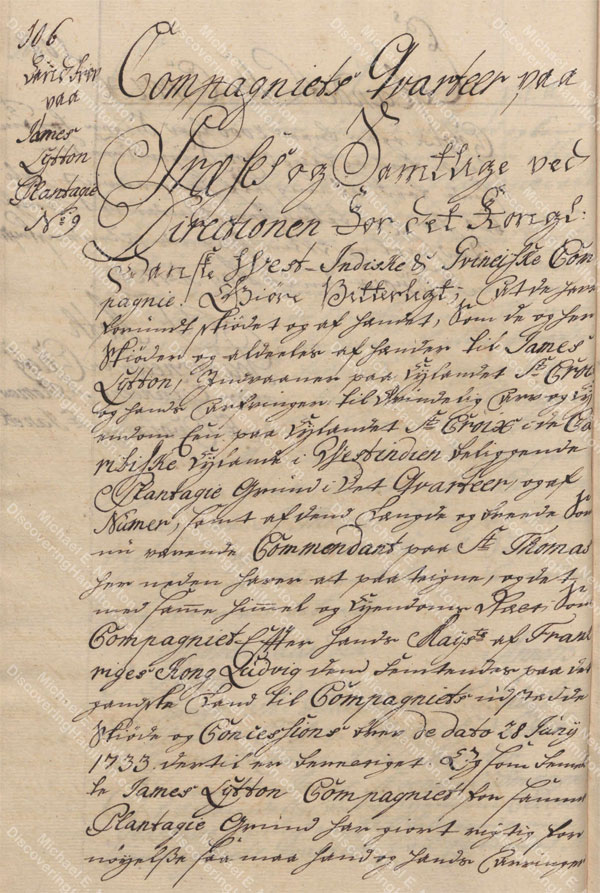 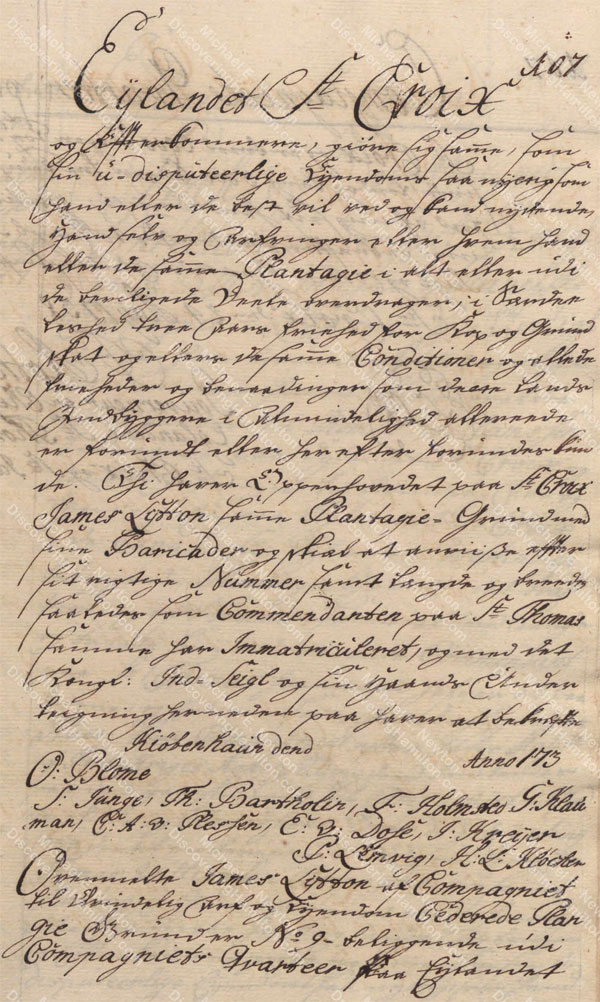 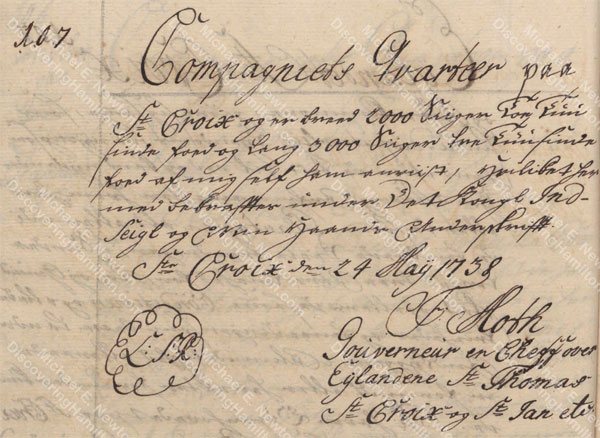 When James Lytton sold the plantation in December 1764 to John Denn (several months before the Hamiltons arrived on St. Croix), the “indenture” between them describes the plantation’s boundaries but does not call it the Grange. 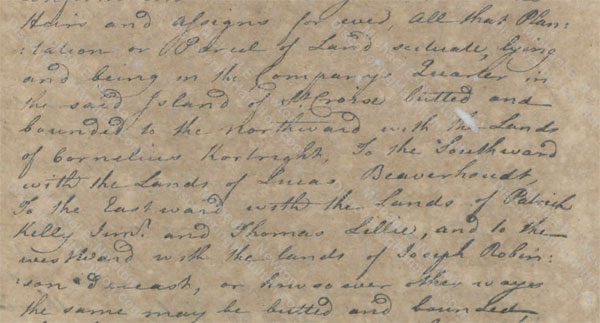 Of course, it is possible that the Lytton plantation was known as the Grange, officially or unofficially, even though this name has not been found in any record of the plantation during Lytton’s ownership of it.

Earliest Records of “the Plantation Grange”

In June 1766, just eighteen months after the Lyttons sold No. 9 Company’s Quarter to John Denn, the estate appears in the records for the first time as “the Plantation Grange.” 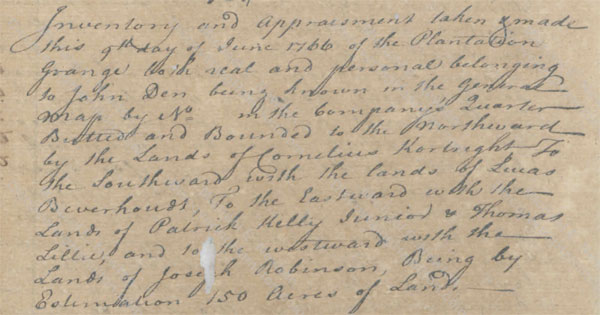 After never appearing in the records as the Grange during Lytton’s ownership of No. 9 Company’s Quarter, it is called the “Plantation Grange” just eighteen months after Lytton sold it and again just six months after that. This probably was no coincidence. It is likely that it was John Denn who had given the plantation the name of Grange after he purchased it in December 1764.

In the records going forward, this plantation is sometimes referred to as the Grange, other times as No. 9 Company’s Quarter, and other times by the name of the owner.

For example, in February 1767, when the plantation was put up for auction, it is repeatedly referred to as “John Denn’s Plantation” but never as the Grange. 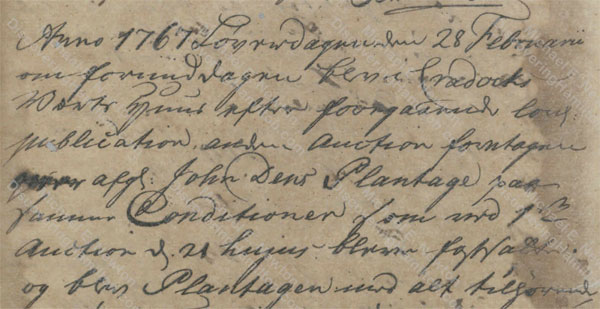 Likewise, in February 1768, when “Rachael Levine,” i.e., Alexander Hamilton’s mother Rachel Faucett Lavien Hamilton, was buried in the Lytton family graveyard, the property was described in the church burial record as “Mr. Tuite’s Plantation,” for the man who owned it at the time, without calling it the Grange.

In contrast, in August 1769, when James Lytton was buried in the family plot, the church burial record described the location as “Mr. Tuite’s Grange Plantation.”

The above are just a few examples. There are many more instances from the years 1767 and onwards in which this plantation is sometimes referred to as the Grange, other times as No. 9 Company’s Quarter, and other times by the name of the owner.

When Did the Grange Plantation Acquire Its Name?

The inconsistency of the records regarding the name of this plantation and plantations in general makes it impossible to determine precisely when this estate first received the name of “Grange.” But there is sufficient evidence to draw a reasonable conclusion.

The lack of any records calling it the Grange during Lytton’s ownership of the property and the multiplicity of records of it with that name shortly after James Lytton’s sale of it to John Denn suggests that John Denn named the estate the Grange when he bought it from James Lytton in December 1764. (It is possible, though unlikely, that the plantation was known as the Grange during Lytton’s ownership of it, but that this name was never recorded due to the inconsistency of record keeping.)

Without any evidence that the plantation was known as the Grange while owned by the Lyttons, it would be incorrect to state that James Lytton built “a substantial estate” on St. Croix “called the Grange,” that the wedding of Rachel Faucett and John Lavien “took place at the Grange,” or that Lytton “sold the Grange,” without clarifying that it probably was not known by that name during any of those events.

On the other hand, we see that this plantation was definitely called the Grange by June 1766. Thus, it certainly was known as the Grange when young Alexander Hamilton buried his mother in the Lytton family graveyard at No. 9 Company’s Quarter.

Hamilton Grange thus stands not just as a monument to our “most remarkable Founding Father”[6] and as a testament to Alexander Hamilton’s prestigious Scottish ancestry, but also as a tribute to his mother, to whom “he was indebted for his genius” and who he “recollected…with inexpressible fondness, and often spoke of…as a woman of superior intellect, highly cultivated, of elevated and generous sentiments, and of unusual elegance of person and manner.”[7]

3 thoughts on “Naming the Grange Plantation of St. Croix Where Alexander Hamilton Buried His Mother”