It is now well established that James Hamilton, Rachel Faucett, James Jr., and the famous Alexander Hamilton lived on St. Eustatius for a number of years in the 1750s and 1760s, but until now it was not known what James Hamilton did to earn an income while on the island.

The Archief van de Middelburgsche Commercie Compagnie [Archive of the Middelburg Commerce Company] contains records of 150 ship’s logs, including 44 voyages to the West Indies and another 73 triangular voyages, most of whose ships also stopped in the West Indies (these numbers are from Wikipedia; I cannot confirm they are accurate). A number of ships of the Middelburgse Commercie Compagnie stopped on St. Eustatius when the Hamiltons were there, but only one of them contained anything about the Hamiltons.

The Drie Gezusters first sailed from the Netherlands to Angola in Africa, then to Suriname in South America, and from there came to St. Eustatius with 405 slaves to be sold at public auction, arriving on April 14, 1758, and staying until July 6, 1758.[3]

In the ship’s Klad Boek [minute book], a Jimmi Ammelton appears five times purchasing slaves in exchange for goods. As there is no one named Jimmi Ammelton in the St. Eustatius census at this time or any other time in the 1750s or 1760s, this clearly was James Hamilton.

In British English, the “h” is often not pronounced or spoken softly.[4] Thus, where it should be “a historic,” the British (and too many Americans) say “an historic.” Or, perhaps more famously, “Henry Higgins” in My Fair Lady becomes “Enry Iggins.” Accordingly, “Hamilton” may sound more like “Ammelton.”

In the first of his transactions (image 7 in the Klad Boek [minute book]), Jimmy Ammelton [James Hamilton] purchased 2 enslaved men in exchange for 103 guilders, 13 stuivers, and 8 pennings worth of “Goederen Voor de Slaaven [goods for the slaves].”

“Jimmi Ammelton” is written vertically to the left of the list of goods, but I also included rotated images below the main images.

You can see the column headers in the images of the second, fourth, and fifth transactions.

All of the transactions are undated and it appears that they were recorded after the fact.

In the next transaction (image 12 in the Klad Boek [minute book]), Jimmy Ammelton purchased 2 men, 1 woman, and 1 girl in exchange for 202 guilders and 13 stuivers worth of goods. 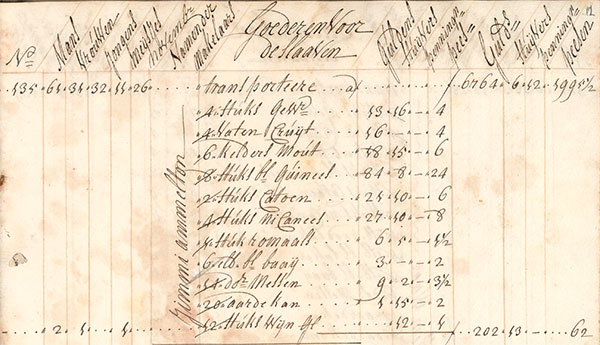 In the next transaction (image 13 in the Klad Boek [minute book]), Jimmy Ammelton purchased 1 man, 1 woman, and 1 boy in exchange for 169 guilders, 19 stuivers, and 4 pennings worth of goods. 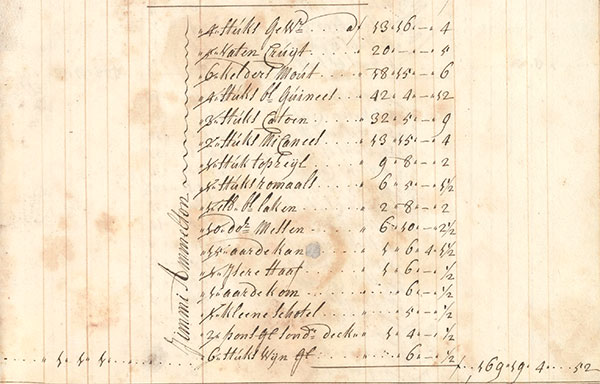 In the next transaction (image 24 in the Klad Boek [minute book]), Jimmy Ammelton purchased 1 man and 3 women in exchange for 303 guilders and 8 stuivers worth of goods. 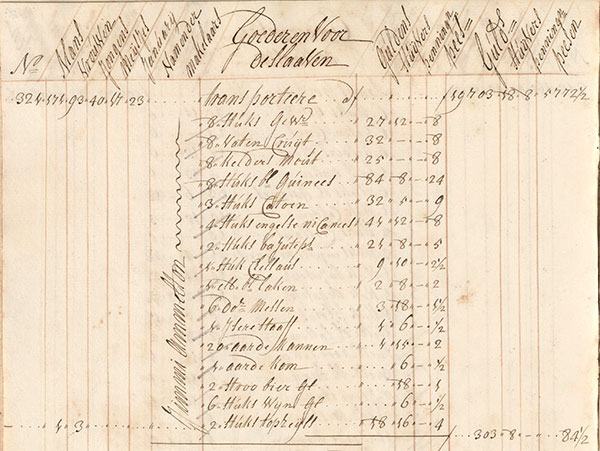 In the final transaction (image 27 in the Klad Boek [minute book]), Jimmy Ammelton purchased 2 men and 1 woman in exchange for 234 guilders worth of goods. 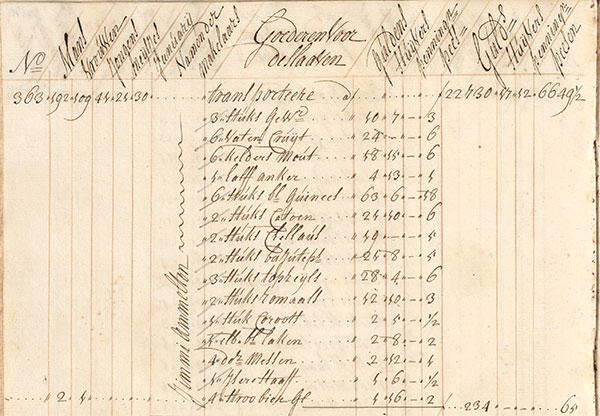 In total, Jimmi Ammelton [James Hamilton] purchased 8 enslaved men, 6 women, 1 boy, and 1 girl, valued at 1,013 guilders, 13 stuivers, and 12 pennings. Instead of paying cash, he purchased the slaves with a variety of goods. (In this volume, all the slaves were sold for goods rather than cash.) The goods James Hamilton sold included guns, gunpowder, malt, cloth or clothing, sheets, calico, cotton, sails, knives, bowls, dishes, wine glasses, beer glasses, ceramic jars, and iron bars.[5]

Since James Hamilton did not own any slaves according to the St. Eustatius census until 1763 (and these were probably his wife’s), the slaves he purchased could not have been for himself. Perhaps, somehow, he owned one or two houseslaves who did not appear in the census, but certainly he could not have owned 16 slaves without having to pay taxes on them. Clearly, he purchased these slaves for someone else.

It is also noteworthy that James Hamilton and the others who purchased these slaves did so with goods rather than with cash. This would seem to indicate that James Hamilton and the others listed in this book were merchants rather than planters or laborers. These merchants, after purchasing the enslaved people, would then turn around and sell these slaves to the planters, laborers, shopkeepers, and homeowners interested in purchasing a slave. Perhaps the merchants even had customers pre-order slaves to be purchased by them when a slave ship arrives in port.

It is also possible that some of these slaves were subsequently exported to other islands. St. Eustatius was an entrepot for the entire region and the island itself had few plantations and therefore didn’t need as many slaves as other islands did. In fact, 1,479 slaves lived on St. Eustatius in 1758, so the island surely did not need another 405 slaves in a single year. Some of these slaves must have been taken to other islands in the region. James Hamilton had previously been a merchant on St. Kitts, and it is possible he was still living and working there since he does not appear in the 1758 St. Eustatius census, so he may have exported some or all of the slaves he purchased on St. Eustatius to St. Kitts or to Nevis.

Purchasing 16 or the 405 slaves (4.0% percent of them) for 1,013 of the 25,770 guilders collected[6] (4.1% of the total), James Hamilton was not a large player on St. Eustatius, nor was he a mere shopkeeper dealing in trifles eking out a living. Whether he made money on these transactions is not known, but at least at this time, he did a fairly significant business for someone who in 1753 had to leave St. Kitts on account of debt[7] and whose “affairs at a very early day went to wreck, so as to have rendered his situation during the greatest part of his life far from eligible.”[8]

[1] According to Wikipedia, “a snow, snaw or snauw is a square-rigged vessel with two masts, complemented by a snow- or trysail-mast stepped immediately abaft (behind) the main mast.” “The word ‘snow’ comes from ‘snauw’, which is an old Dutch word for beak, a reference to the characteristic sharp bow of the vessel.”

[4] Thank you Doug Hamilton for this insight.

[5] I would like to thank Ruud Stelten for translating the more difficult Dutch words and abbreviations used in these transaction records.

[7] See Discovering Hamilton pages 19 and 79 or this lecture.

Due to a technical glitch, the last blog post was not sent to email subscribers. If you missed it, it can be found here.

© Posted on August 16, 2021, by Michael E. Newton. Please cite this blog post when writing about these new discoveries.