Pick up an Alexander Hamilton biography and you are sure to run into John Michael Lavien. Or Johan Michael Levine. Or some other spelling of this name.

John Michael Lavien, Johan Michael Levine, or however the name is spelled, was the first husband of Rachel Faucett, Alexander Hamilton’s mother. I have written about his separation and divorce from Rachel here and plan to write more about him in the future.

In the records of Nevis, St. Kitts, and St. Croix, I have found no fewer than thirty-two different ways to spell his last name. [Note: The letter “v” is often written as a “w” so I count each pair as just one spelling.]

So which is the correct spelling? How does one determine which is correct?

The best way to determine the spelling of a name is to see how the person himself wrote it. In Alexander Hamilton: The Formative Years, I wrote, “No signatures of John Lavien have been found.”

Fortunately, I have since found signatures of John Michael Lavien, showing how he spelled both his first and last name.

In 1749, John Michael Lavien signed a document in Christiansted’s bailiff registers. The signature reads “John M Lavien.” [Note: The “a” is “Lavien” could be seen as an “o,” but compare it to the “o” is “John” and it is clear that they are different letters.]

Another signature, found in a collection of “legal documents” from Christiansted, dated 1760, also has him signing his name as “John M Lavien.” [Note: This time, the “a” is “Lavien” looks more like an “o,” but compare it to the “o” is “John” and it is clear that they are different letters.]

With the “a” in “Lavien” looking nearly as much like an “o” and the “ie” in “Lavien” also looking like it could be something else, perhaps a “u,” “ee,” or “ei” (the dot over the “i” clarifies the situation), it is not hard to see why people who were tasked with quickly transcribing documents would misread and misspell this name.

In November 1769, Peter Lavien returned to Christiansted, St. Croix, from South Carolina, to collect his inheritance as the only legally legitimate son of Rachel Faucett Lavien Hamilton. On November 22, 1769, he signed the probate record “P Lavien,” confirming his receipt of the 632 rigsdalers, 6 reals, and 5½ styvers. 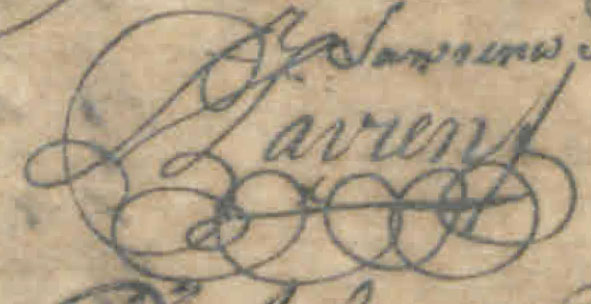 Thankfully, in this case, the “Lavien” spelling is crystal clear (although the “P” is hard to distinguish here).

We thus see that his last name was Lavien and his first was John. His name was John Michael Lavien.

Because of the various ways one could pronounce “Lavien” and the various spellings of this name, I have heard people pronounce this name many different ways. The misspellings may in fact help us determine how the name should be pronounced.

Misspellings can be cause by two different factors:

Clearly, spellings such as Loevin and Lovien are based on incorrect transcriptions. On the other hand, La Vien, Lavine, Levine, etc., which do not resemble the original in spelling, must be based on how the name was pronounced.

Alexander Hamilton, who knew of his mother’s first husband and his half brother, must have heard the name pronounced much more frequently than the had seen the name spelled. Moreover, with time, Hamilton would be more likely to remember the pronunciation more than the spelling. Thus, in 1782, Hamilton wrote of “Mr. Lavine,” his half brother.[2]

Based on Hamilton’s spelling of this name and other misspellings that must have been based on pronunciation rather than transcriptions errors, it would appear that the first syllable of Lavien should be pronounced either as “Lah” or “Luh” and the second a “vin” or “veen.”

[1] In Alexander Hamilton: The Formative Years, I wrote about Peter Lavien’s signature in his “last will and testament,” but this signature was actually a copy. It was transcribed correctly, but we are looking for original signatures only to determine the spelling.

[2] Another Hamilton document from 1800 also spells the name “Lavine” three times, but this document is a copy and Hamilton’s original letter either no longer exists or has not been found.

© Posted on September 23, 2021, by Michael E. Newton. Please cite this blog post when writing about these new discoveries.