Any reader of this blog or of Alexander Hamilton: The Formative Years should know by now that the name Faucett has been spelled and misspelled many different ways. I have found twenty-one different spellings of the Faucett name (perhaps I’ll share these in another blog post). Of course, thanks to a recent discovery, we all know that the correct spelling is Faucett because that is how the patriarch of the family, John Faucett, signed his name in a 1720 deposition.

When Rachel Faucett Lavien Hamilton returned to St. Croix in 1765 along with her sons James Hamilton Jr. and Alexander Hamilton, she appeared in the island’s matrikels (census and tax lists) for 1765 and 1766 as Rachel Fatzieth. 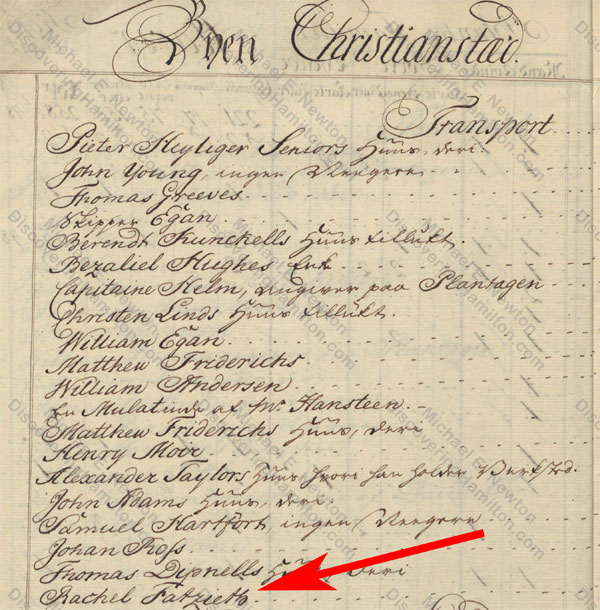 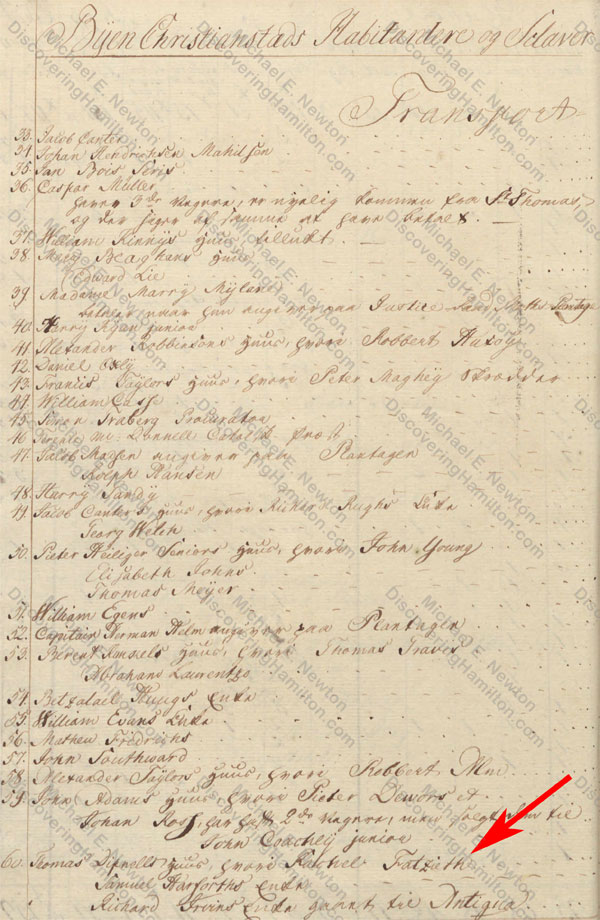 Seeing these records, or relying on those who had already written about them, Hamilton biographers have assumed that Fatzieth was a simple misspelling of Faucett, albeit a bizarre one. For example, H. U. Ramsing wrote that “she appears on the list…at first in 1765 and ’66 under her maiden name Rachael Fatzieth (!)…”[1] Broadus Mitchell remarked in an endnote, “She and her sons appear in tax lists; in 1765 and 1766 she is called Rachael Fatzieth.”[2] James T. Flexner noted that “the poll tax reveals she lives there…under her maiden name of Faucett (spelled by the tax collector with fine abandon as Fatzieth).”[3] Even I reported in Alexander Hamilton: The Formative Years that “poll-tax lists from 1765 and 1766 spelled it Fatzieth,”[4] as if this was just a normal misspelling of Faucett.

As these matrikels were the only known records in which Rachel appeared as Fatzieth, it was logical to assume that this was a mere misspelling and not the result of some purposeful act by Rachel or by the authorities. 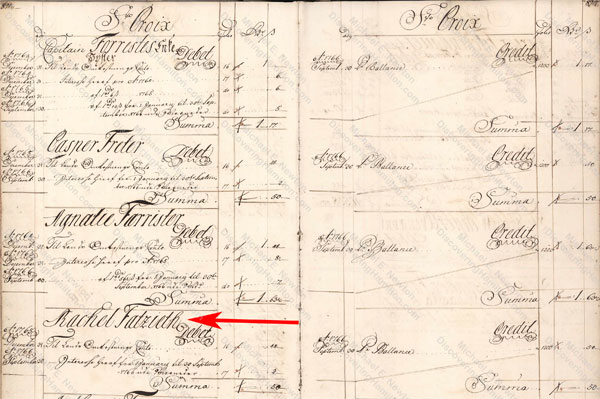 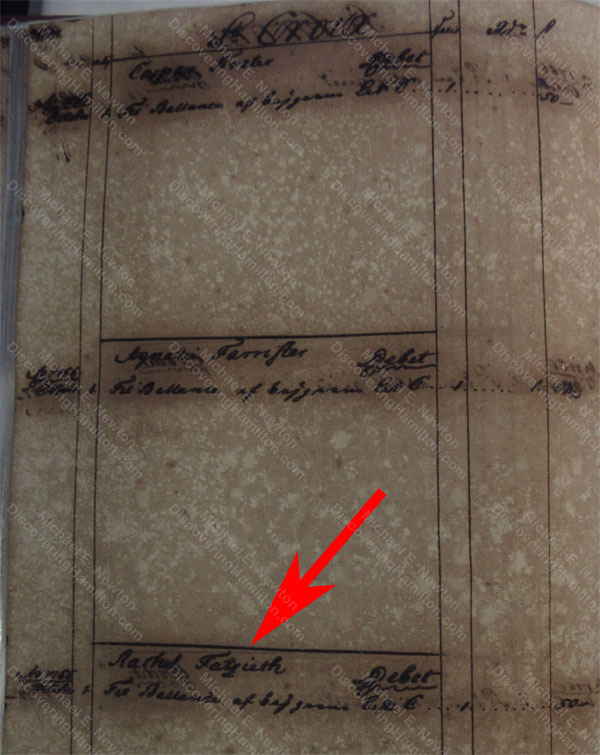 Rather than having just one set of documents listing Rachel with the last name of Fatzieth, we now have two independent sets of records showing this, for one assumes that the accountants or clerks maintaining the ledgers were not the same people who took and recorded the matrikels.

Is it plausible that two independent sets of people misspelled the name Faucett in the same bizarre fashion? A slight and common misspelling would not be unusual but for two different people to independently spell Faucett as Fatzieth must be more than just an accident.

One possibility is that Rachel Faucett adopted a false name when she returned to St. Croix in 1765 after a fifteen-year absence to try to hide her true identity, both to avoid social humiliation that may result from knowledge of her past and also to keep such information from the authorities, fearing she would be “further punished (if seized) according to law and ordinances.” Although the threat of further punishment was part of John Lavien’s claim against Rachel and not part of the court’s final ruling (these documents can be viewed in my post about the extramarital affair of Rachel Faucett), John Lavien could have brought such charges against Rachel if he so desired now that she had returned to St. Croix. It will be recalled that Rachel was imprisoned in 1749–1750 for “fornication” with Johann Cronenberg; perhaps now she would be imprisoned again, this time for “fornication” with James Hamilton. Moreover, Rachel may not have been aware of all the details of the ruling against her and may have feared that the court did indeed sentence her to further punishment if she returned to St. Croix.

When Rachel Faucett died in February 1768, her burial record recorded her age as thirty-two. It has long been known that her age was recorded incorrectly in this document. If Rachel was thirty-two when she died in February 1768, that would imply a birth in 1735 or 1736. But we know that she married around 1745 and had a son, Peter Lavien, in 1745 or early 1746. As I concluded in Alexander Hamilton: The Formative Years, based on a gap in the baptismal records from her family’s church on Nevis, Rachel must have been born “sometime between the spring of 1725 and the end of 1729.” Whereas many biographers, including myself, have argued that “a recording or transcription error is the most likely cause of Rachael’s mistaken age”[5] and others have contended that Rachel “exercised the feminine prerogative of forgetting a few of her years,”[6] perhaps the change in Rachel’s age was not the result of a clerical error or an attempt to merely appear younger, but was instead an attempt to hide her true identity. Rather than being Rachel Faucett born in 1725–1729, she was Rachel Fatzieth born in 1735–1736. Thus, it may be that Rachel had changed not just her last name to try to hide her identity but also her age.

Did Rachel Faucett Try to Hide Her Identity?

The major flaw in the above theory is that the name Fatzieth is too close for comfort to the name Faucett. If Rachel wanted to hide her identity, she could have chosen a completely different name not in any way resembling her real name.

Interestingly, I have been unable to find a single instance of the name Fatzieth aside from those referring to Rachel Faucett. Google and Google Books yield nothing if one searches for Fatzieth while excluding Hamilton.

Why would Rachel choose such an unusual name and yet one so similar to her real name? Would not a more common name, like Jones or Smith or anything else, been a better way to hide one’s identity? Perhaps Rachel reasoned that choosing a more common name would have led to questions. People would have asked her if she was related to this Smith or that Jones. Choosing a unique name might have avoided those questions, though it might have prompted questions about the name itself, i.e., the origin of the name and the identity of Rachel’s parents. But perhaps Rachel had prepared for such questions and thus had little to worry about, at least regarding her name.

On the other hand, perhaps Rachel provided a last name similar enough to her real one to provide cover for herself if someone discovered the truth. If she had chosen a totally different last name and someone revealed her true identity, it would prove her to be a liar. But choosing a similar name, she could claim that the clerk had just recorded it incorrectly and she either was not aware of the error or hadn’t bothered to correct this insignificant mistake.

Why didn’t Rachel just call herself Rachel Hamilton and thereby avoid the Faucett name entirely? One must assume, as seems likely, that people on St. Croix knew the identity of Rachel’s new partner, i.e., James Hamilton, and that taking his name would have immediately revealed her identity just as if she had used Faucett or Lavien.

Why Return to St. Croix?

If Rachel feared discovery of her true identity and possible prosecution, why would she come to St. Croix at all, even with a false identity? Why not just stay on Nevis, St. Kitts, or St. Eustatius, her previous places of residence, where according to the scant evidence that is available, it appears that she and James Hamilton lived together happily as a married couple?

We know that James Hamilton came to St. Croix in 1765 and had to stay on the island for some time. Joining her husband would, of course, be one strong motivation for Rachel to come as well. On top of this, Rachel had family, most notably the Lyttons, on St. Croix, who not only would provide her with friends on the island but could also give her financial assistance if needed. And probably even more important, Rachel might have thought that St. Croix, an island more prosperous at this time than Nevis or St. Kitts and with wealthy relatives living there, would be a better environment for her two sons, James Hamilton Jr. and Alexander Hamilton. It is not a stretch to imagine that Rachel was willing to risk her own reputation and even possible imprisonment to benefit her children.

Alternatively, perhaps Rachel did not plan to stay on St. Croix for long and thought her secret would be safe for a short time, but then she ended up staying longer than expected and must have known that her secret would eventually be discovered.

After appearing as Rachel Fatzieth in the matrikels of 1765 and 1766, she is listed in the 1767 matrikel as Rachel Lewin (a common misspelling of Lavien). The following year, in the matrikel of 1768, which was compiled after Rachel’s death, her slaves are listed as the possessions of the estate of Rachel Lewin. 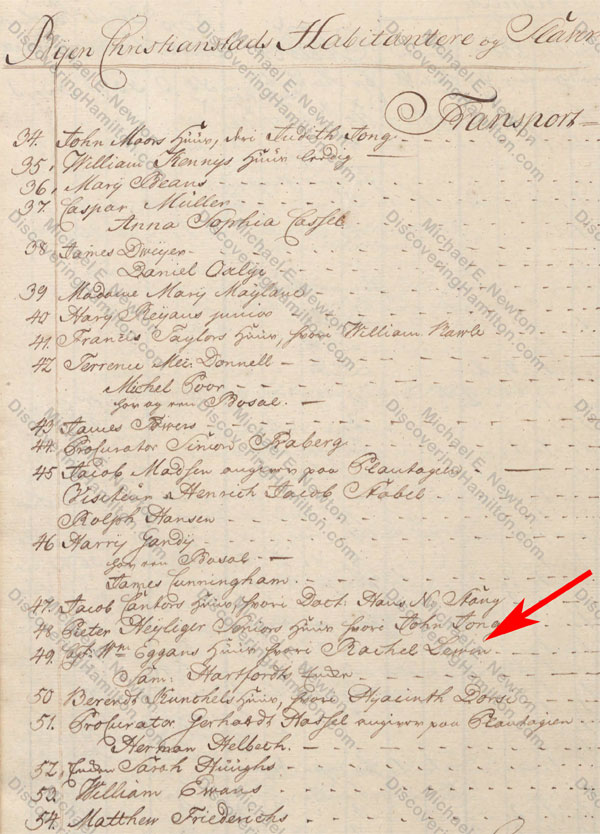 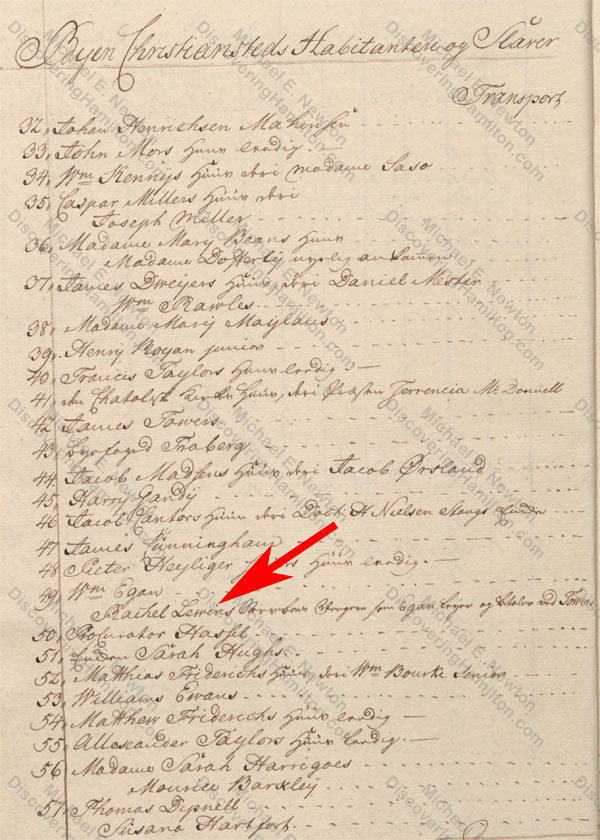 The change from Fatzieth to Lewin suggests that the island’s authorities had discovered Rachel’s true identity and she was forced to abandon her alias and use her real legal name.

Perhaps it is no coincidence that the discovery of Rachel’s true identity by the authorities in 1767 coincided with James Hamilton’s permanent departure from St. Croix, which occurred sometime between June 1766 and February 1768.

Regardless whether James Hamilton knew all the details of Rachel’s past or only learned about them in 1767, the revelation of Rachel’s true identity might have forced James and Rachel to separate rather than risk legal prosecution. Alternatively, it is possible that James’s permanent departure from St. Croix had nothing to do with Rachel’s past. As I have written previously, James Hamilton’s departure from St. Croix and failure to return may have “occurred when James Hamilton was on a lengthy voyage and was detained elsewhere, possibly by injury, illness, or legal disputes, and then was unable to return due to a lack of money and perhaps some embarrassment regarding his financial situation.”

© Posted on August 13, 2018, by Michael E. Newton. Please cite this blog post when writing about these new discoveries.